Against a strong opponent like Seventy-First, that proved to be a bad combination in a 67-44 Pirates loss.

“(It was) a mix of a lot of things,” Lumberton coach Bryant Edwards said. “They’re well-coached, they’re well-prepared. They did what they needed to do tonight to beat us. They got J.B. (Brockington) in foul trouble, they got him out of sorts and held him (to one point). They did exactly what they needed to do for the score to be what it was. They took us out of our game, we got out of whack.”

“I told our guys (in a timeout about that time), we’re getting beat off the ball, they’re getting too many second-chance points — and that’s one thing we hit so hard for the past two days,” Edwards said. “We went over how they play, what they do until they’re blue in the face. But at the end of the day, they produced, we didn’t.”

Lumberton held Seventy-First scoreless for the rest of the half, but the Pirates only scored five points themselves over that four-plus minute span and trailed 30-24 at halftime.

The teams exchanged baskets over the first four minutes of the third and Seventy-First led 36-30 with 4:03 left in the period; that’s when the Falcons made their second run, holding the Pirates to just two baskets over the next seven minutes to go on a 16-6 run and take a 52-36 lead with 5:29 remaining, and the Falcons gradually increased their margin from there.

Xavier Tubbs Matthews had four baskets during that run as part of a 27-point night for the Falcons.

“He controlled the entire game,” Edwards said. “He controlled tempo, he was soft around the rim, he got the ball where it needed to be, when it needed to get there. The poise he has really impressed me. I knew he could shoot the ball pretty good, but that wasn’t his strong suit tonight. He didn’t settle. He attacked what we were trying to give him and he made us pay.”

“We didn’t shoot the ball well, aside from Cobe, and the shots he made were tough shots,” Edwards said.

Lumberton will have a quick turnaround to face another tough test Saturday when they play undefeated Richmond at 6 p.m. in the MLK Classic at Red Springs.

“I like quick turnarounds; I prefer not to wait around until like next Tuesday to play again after a loss like this,” Edwards said. “That’s the worst loss that we’ve had in three years of me being here, so this is new territory for Lumberton basketball right now. We’ll get back in the gym early with shootaround, and we’ll see what team shows up tomorrow for Richmond, because if we don’t, that one could get ugly too.”

After 3-pointers from Gabby Locklear and Carly Hammonds on back-to-back possessions, the Lumberton girls basketball team trailed Seventy-First by three points midway through the second quarter.

But the Pirates couldn’t sustain that run, and Seventy-First finished the half with a run of its own, pulling away en route to a 81-51 win.

“They started hitting shots. About 10 minutes into the game, they didn’t miss a lot,” Lumberton coach Ivy Johnson said. “We had a few defensive breakdowns where we gave them some open shots up on the back side.”

Seventy-First (10-4, 4-2 United-8) answered with a 17-2 run to end the half, with Hannah Lewis scoring seven points in the stretch, giving the Falcons a 37-19 halftime advantage.

While the score heavily favored the Falcons, Johnson was pleased with a renewed energy she saw from the Pirates, even well into the second half when the outcome was not in doubt.

“They played hard; we competed at a different level tonight,” Johnson said. “We’re starting to come around, and you see a little bit of a spark in their eye. We had a hard week of practice and we’re getting over some things that have been holding us down, and we’re going to continue to learn and grow, and the girls are believing and they’re loving each other right now, and that’s what we need to get to where we need to be.”

“Sydney Jacobs battled hard tonight; she came in and was the Sydney Jacobs that we want every night,” Johnson said. “If she gets better than she was tonight, it’s going to be a whole new team that we’ll be able to be. Not only did Syd step up, but her teammates supported her while she was stepping up, so it was really fun to see that growth happen.” 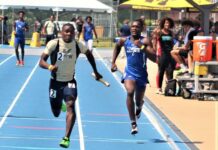