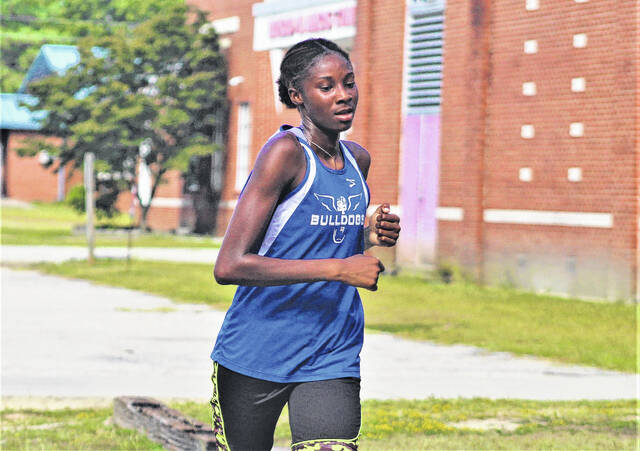 Shaun Emanuel and Taliya Council each crossed the line first for the Bulldogs.

“It was kind of tough on the dirt road part, especially going uphill over there,” Emanuel said. “I passed the police officer (who was leading the field); I know she was doing 10 miles per hour, and I caught up to her pretty close.”

That group helped St. Pauls to win the team competition with 36 points, just ahead of Red Springs’ 40. Clinton finished with 54 in third place.

Council finished in 25:33 to win the girls race, about a two-minute improvement from her previous race.

“Somebody else pushed me, motivated me; she had a good start out, and I ran with her a little bit,” Council said. “And then I picked up the pace and ran with the boys, so that helped me out.”

Midway’s Madisen Cannady finished second in 25:46, helping lead the Raiders to the team victory with 27 points, with five Raiders runners among the top 10 finishers. West Bladen was second with 72 points, Fairmont third with 97, St. Pauls fourth with 114 and Red Springs and Clinton tied for fifth at 118.

The Pirates’ Holserson Joseph scored a hat trick in the victory, with all three goals coming in the second half.

Lumberton (7-1, 3-0 United-8) led 3-0 at halftime; the Pirates took an early 2-0 lead on a goal by Alexis Lopez, assisted by Joseph, and a goal by Luis Izeta, assisted by Jair Santos. Gray’s Creek (2-4, 1-1 United-8) scored its lone goal on a free kick that deflected off Lumberton’s wall, before Santos scored off a Jon Carrera assist before halftime.

“I was very impressed with Gray’s Creek’s midfield; they caused us some problems,” Lumberton coach Kenny Simmons said. “We picked up some early injuries. But overall I thought our speed on the wings and depth was the difference.”