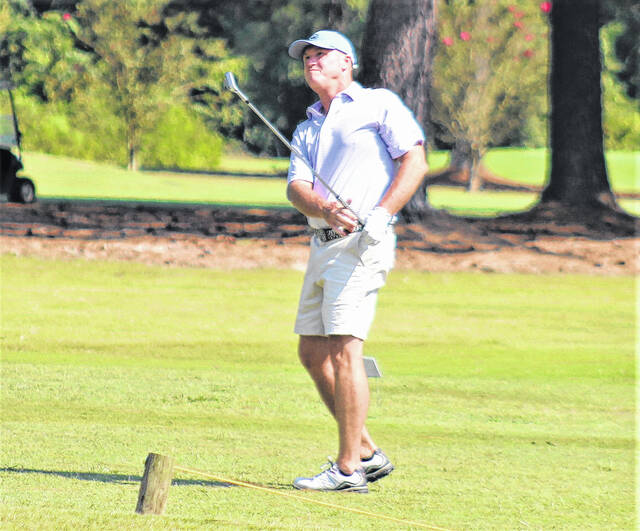 Scott Benton hits a pitch shot on the 11th hole in the final round of the Robeson County Golf Championship Sunday at Pinecrest Country Club. 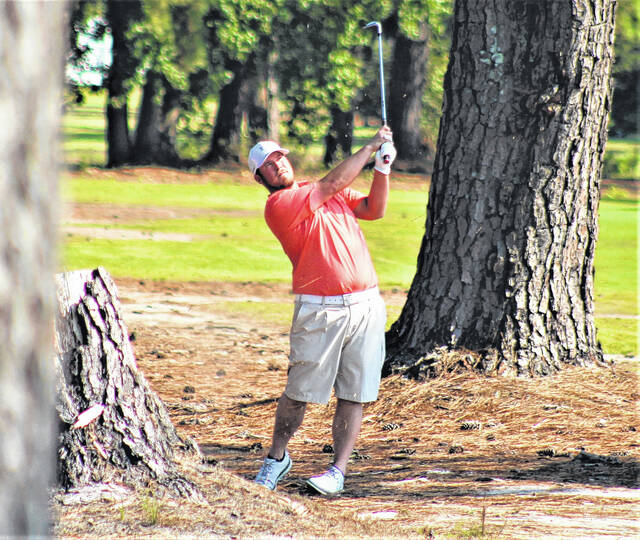 Ryan Bass hits his second shot on the 16th hole in the final round of the Robeson County Golf Championship Sunday at Pinecrest Country Club.

A year later, he returned to the course — and Sunday, he completed his comeback.

Pippin shot a 3-under 69 to come from behind and win the tournament for a second time, beating overnight co-leaders Ryan Bass and Scott Benton by a stroke.

“It’s pretty special because I took about a year-plus off (of golf), and then I had to get back,” Pippin said. “This (tournament) means a lot to me, because it’s with my friends on my home course. This is my Masters.”

Pippin had played golf all his life, played collegiately at UNC Pembroke, and was the county champion five years ago before everything changed.

“I had a health scare, and I figured the Lord was talking to me and He wants me to follow him, ultimately, and I had golf as a priority in my life, so I just laid them down altogether,” Pippin said. “I got the itch, after about a year passed, and I played with a couple of brothers in the church. … It wasn’t easy to get back.”

Pippin played one pairing ahead of Bass and Benton on Sunday and was never sure where he stood in the tournament, even as he knew he was making a final-round charge; this began with consecutive birdies on holes No. 2 and 3 for the second straight day.

A 30-foot eagle putt at the par 5 eighth gave Pippin the tournament lead; while he wasn’t aware where he stood, he knew it was a big moment and jumped in the air in celebration.

“I’m an emotional player and I make a lot of noise, but wanted to respect the other players, so the only way I could express my emotions without making a lot of noise was to jump,” Pippin said.

“I hit the shot of my life; I’m surprised it didn’t go in,” Pippin said. “The divot was (two feet) in front of the hole and the ball was (two feet) behind the hole. So I just tapped it in for birdie.”

The birdie left Pippin at 4 under before a run of pars from the 11th to the 17th, with a few missed mid-range birdie putts.

“I kind of got out of my comfort zone,” Pippin said. “I’m 4 under, so I hit some nervy shots, I was nervy on the green, but I was hitting the ball good enough that I made pars. I don’t know what I need; everyone’s behind me, I don’t know what they’re doing.”

Pippin bogeyed the 18th, finishing his round of 69.

“That was close to it, under the circumstances, one of the best rounds I’ve ever played,” Pippin said. “Last time I won it I think I shot 71, but that wasn’t as much pressure because (today) I didn’t know what the guys behind me were doing. I was trying to go as low as I could the whole time, because I didn’t know.”

Pippin’s finishing bogey left him tied with Bass after Bass birdied the 17th, hitting a 50-yard pitch to tap-in range after about a 300-yard drive at the short par 4. But Bass, who also wasn’t sure where he stood, bogeyed the final hole after missing the green long and left and missing a 15-foot par putt.

“I didn’t really know how to do; I was thinking I had to birdie to tie (Pippin),” Bass said. “I guess I should’ve tried to make par, maybe I would’ve tied him then. I’m happy (Pippin) won; I just wish I could’ve played a little bit better.”

Bass had fought his way back to a share of the lead after hitting his opening tee shot out of the bounds, leading to triple bogey on the opening hole. The three-time tournament champion chipped in for birdie at No. 2, but made pars on the remaining front-nine holes, including both par 5s.

“I did not hit the ball (well); that front nine was just bad. Driver really was just putting me in bad positions,” Bass said. “It was just an up-and-down day, just a battle all day with my swing. I did putt good; I made some putts and I didn’t miss any short ones. I did my best — I didn’t have my best, but I did what I could with what I had.”

Birdies at No. 10 and 11 “got me some momentum,” Bass said, and got him back to even par for the day, but he was unable to make any more birdies until the 17th.

Benton tied with Bass, one stroke behind Pippin, after an even-keel round of 72; the four-time tournament champion, who was seeking his first title since 1992 and finished second for the second straight year, did not make a bogey until the 13th hole, but only had one birdie in that stretch after leaving himself mostly mid- to long-range birdie putts.

He birdied the eighth and turned with a 3-under total; after the bogey at 13th, he birdied the par 5 15th, but gave that shot back with bogey at the 16th. He missed birdie putts of 10 and 30 feet on the last two holes, either of which would have tied him with Pippin.

Beating two players with a combined seven tournament titles was not lost on Pippin, who said some good breaks over the course of the three rounds helped him earn the win.

“I just think things went my way this week, not that I’m better than any of the other guys; they’re definitely better than me,” Pippin said. “I just came out on top, and it was definitely my week.”

Mike Chuchacz and John Haskins both shot even-par 72 to finish at 1 under overall, tied for fourth two strokes behind Pippin.

Chuchacz, who was playing with Bass and Benton, made a bogey at the fifth and a birdie at the eighth in a front-nine 36. After he bogeyed the 10th, birdied at holes No. 11 and 15 got him to 2 under overall, within two strokes of Pippin at the time; he bogeyed the 16th and made par on the final two holes.

Haskins, playing with Pippin, bogeyed the first two holes before recovering to a front nine of even-par 36; he shot another 36 on the second side.

Mack Kenney, who played with Pippin and Haskins in the penultimate group, shot 72 to finish at 1 over in sixth place. Kenney was 3 under for the day and 2 under overall through eight holes before a double bogey at No. 9.

Chad Martin shot a 2-under 70, the second best score of the day in the Championship Division, to finish seventh at 2 over.