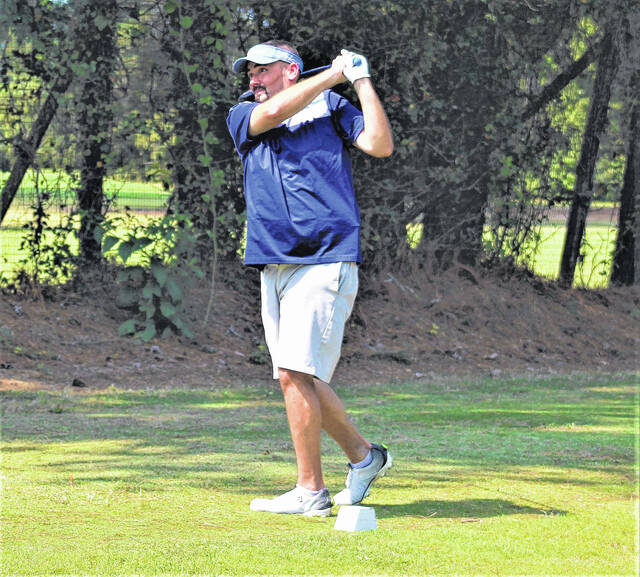 Brian Haymore hits his tee shot on the 18th hole during Saturday’s round at the Robeson County Golf Championship. Haymore leads the Regular Division after a round of 74. 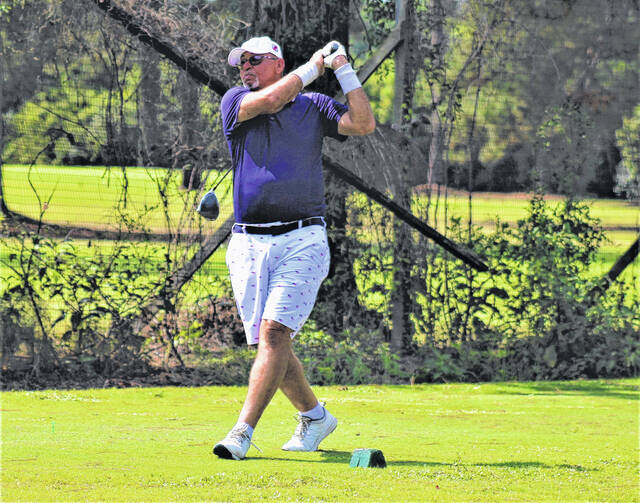 Lonail Locklear hits his tee shot on the 18th hole during Saturday’s round at the Robeson County Golf Championship. Locklear leads the Senior Division after a round of 71. 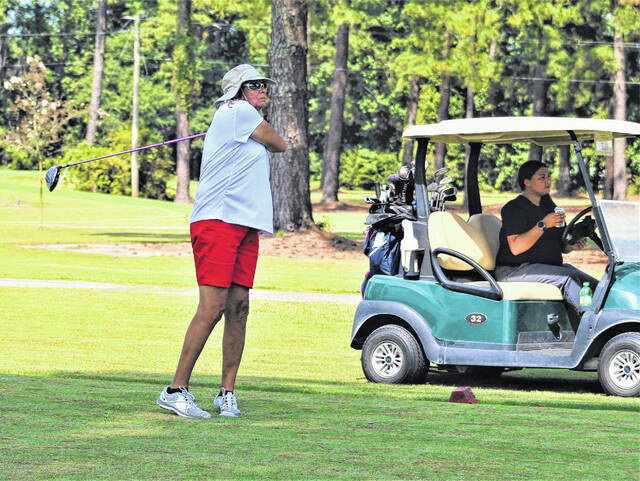 Pandora Carter hits her tee shot on the 17th hole during Saturday’s round at the Robeson County Golf Championship as playing partner Amy Maynor looks on. Carter leads the Ladies Division.

LUMBERTON — Cliff Nance led the Robeson County Golf Championship’s Super Senior Division entering Saturday’s round after a Friday round of 1-over 73.

Nance’s round Saturday was more of a struggle — but it was for the rest of the field, too, and despite a round of 78, Nance held on to win the division championship by two strokes over David Ray Lowery.

“My game’s like a box of chocolates, you never know what you’re going to get,” Nance said. “Yesterday I scrambled well, and I was able to get the ball in places where I could get up and down, and I made no major mistakes. Today was a little bit of the opposite. I was not in control, and I was getting in positions where I would make big numbers — I made two doubles today.”

Nance shot a 7-over 43 on the front nine, but made four birdies on the back nine to shoot a 1-under 35 — the only under-par nine-hole score in the field either Friday or Saturday — to seal the victory.

“I was fortunate on the back side I was able to get my putter going a little bit and made four birdies, and that kind of loosened me up, once I made a birdie on 11, and I kind of was able to get it in,” Nance said. “I was trying to play one shot at a time, as cliche as that may be. I was trying to minimize the damage.”

With a 7-over 151 total, the victory is Nance’s first in the event.

“I’ve been participating in it for many years off and on, but more recently I haven’t participated,” Nance said. “But it’s nice to win, particularly when you get 70 (years old).”

The field struggled on Saturday, with scores in the division averaging about 2 1/2 strokes higher than in Friday’s round.

Lowery, who started the day a shot behind Nance, shot a 79 in Saturday’s round to finish with a 9-over 153 total. Donnie Beck and David Hunt tied for third at 10 over.

Greg Canady shot rounds of 80 and 81 to win the second flight, four strokes ahead of runner-up Billy Dean Hunt and 10 ahead of third-place Ancil Jacobs.

Defending champion Brian Haymore took the 18-hole lead in the Regular Division Saturday with a 2-over 74.

Haymore shot a 1-under 35 on the front nine, the only under-par nine-hole score of any Regular Division player.

Roy Williamson and Gavin Locklear are one stroke back after shooting 3-over 75. Both will play with Haymore in the final round Sunday.

Jody Allen is fourth after a 77 and Phillip Wallwork is fifth after a 78.

Another defending division champion, Lonail Locklear, also leads after Saturday’s round; Locklear shot a 1-under 71 to lead the Senior Division by a stroke over LeMark Harris.

“The wind sort of played a little factor on us,” Locklear said. “But after that it was all over.”

Locklear hopes to continue his strong play Sunday as he tries to win the division title again.

“(I’ll) try to play just the way I played today,” Locklear said. “Just play the course, not overpower it, that’s my main thing.”

“I had some good looks; I just didn’t strike the ball when I should have made them,” Harris said. “I knew I had to stay with (Locklear), because I can’t give him too many strokes for tomorrow. But one (stroke back) isn’t too bad. I’ve just got to putt better.”

Joe Locklear is third after an 83 Saturday.

Last year, Pandora Carter was the only player in the Ladies Division. This year, she’s glad to have come competition.

Carter shot a 94 on Saturday, including a 44 on the front nine, playing with fellow competitor Amy Maynor, who shot 117.

Carter is thankful to have a competitor in her division this year, but hopes the division will continue to expand its field next year.

“Yes, it is (nice to have some competition),” Carter said. “It would’ve been nice if we had more ladies to play, but maybe next year.”