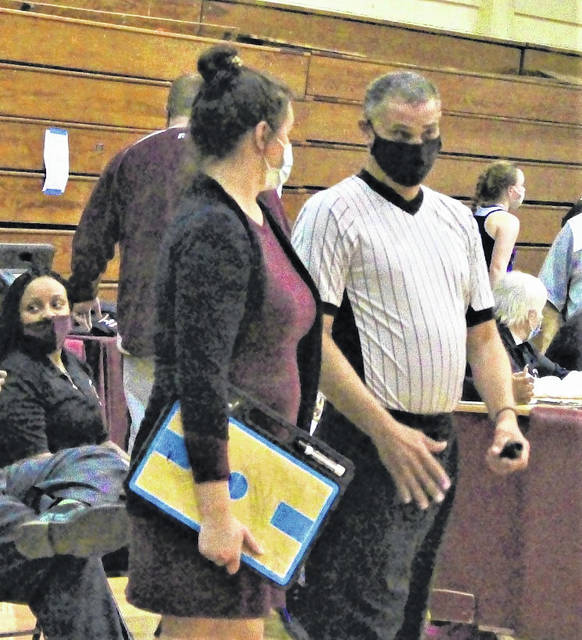 LUMBERTON — Officiating high school sports during the 2020-21 school year was more challenging than in previous years as officials navigated the COVID-19 pandemic.

Two local officials were recognized for their dedication to the craft in not just the last year, but the last two decades.

Anthony Maynor, of Pembroke, and Adrian Lowery, of Lumberton, each earned the Dick Knox Distinguished Service Award from the North Carolina High School Athletic Association. Maynor was a recipient of the award in 2020 and Lowery in 2021; both were recently given their awards by the Southeastern Sports Officials Association, with Neil Buie, the SSOA’s regional supervisor of officials, and Brad Allen, a former SSOA official from Lumberton who is now an NFL referee.

“It was kind of a surreal moment, and it’s one of those awards that you always strongly feel that you did something or you touched someones lives, and you hope that one day someone tells you that you’ve been nominated and you’re going to be chosen for that particular award,” Maynor said. “It’s always good to know you have those fellow officials that you are a mentor for, because obviously when I started I had plenty of mentors, from Brad (Allen) to Leon (Maynor) to Van Sampson. I’m just thankful and humbled.”

The award recognizes “devoted service and involvement with young student athletes of our state,” stating the lives touched by the officials are “a tribute to the positive influence of high school athletics.”

Allen has worked with both Maynor and Lowery and was proud to present the award to both of them.

“These recognitions by the NCHSAA and the SSOA are fitting for two fine gentlemen who have committed many hours of service to high school football,” Allen said. “They are passionate about working as hard as they can to ensure the integrity of the game for student athletes, coaches and fans. We are very proud of them both.”

“I came in under Mr. Leon Maynor, who is now gone, but he was very influential, along with Brad (Allen), in getting me started, especially in rec ball, in working with kids, and then working at the middle school level,” Lowery said. “The last couple years there’s been a shortage of officials, so even though I’ve kind of risen up through the ranks and eventually became a white hat, I still work as much of the middle school ball as I can, just to make sure I’m giving back and not forgetting where I came from.”

Maynor has been officiating since 1999, and works high school football, basketball, baseball and softball games. He has also been a college football official at the NCAA Division I-Football Championship Subdivision level since 2015, working Colonial Athletic Association, Ivy League and Patriot League games, and previously officiated Division-II football from 2009-15.

“I enjoy the camaraderie of being around fellow officials, and able to train new officials, see new officials grow up and excel in their craft and to get better,” Maynor said. “It’s always good seeing local guys moving and taking that next step to — I don’t want to say higher-quality games, all games are important to each job, and one game’s no different than the other — but it’s always good to see guys work playoffs, work state championships, and I’ve been able to work three state championships.”

Both continued to officiate games during the pandemic-affected 2020-21 school year, dealing with the roller coaster of pandemic-era restrictions and protocols.

“It was very difficult, especially not being able to do the middle school sports. … Working the state championship is the pinnacle, that’s where you want to be, but in our association working the Richmond-Scotland game is almost like a state championship,” said Lowery, who was scheduled to work this year’s Richmond-Scotland football game before it was canceled due to virus protocols. “You’ve got 9-, 10,000 fans, two good teams, kids going to play college ball and the facilities are top-notch. Not being able to call that game was very disheartening.”

Both look forward to the upcoming school year with the hope that it will present a sense of normalcy, on and off the field.

“I think the officials want to stay safe and do the right thing, but I can’t put a number on the number of high school officials that have been vaccinated, or whatever the case may be,” Maynor said. “I do think we’ll hopefully have some type of normalcy. I guess we’ll find out next week once things start up.”

The award presentation to both men gave a glimpse of that normalcy — and left them looking forward to a new season that’s just weeks away.

“It felt good to get back and meet, when I got the award, to see some of the other officials and to renew the camaraderie,” Lowery said. “But really, I’m ready to get back on the field.”