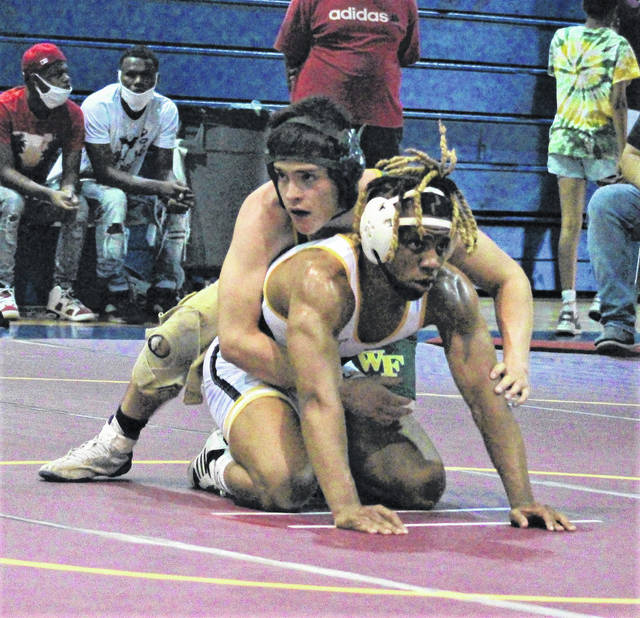 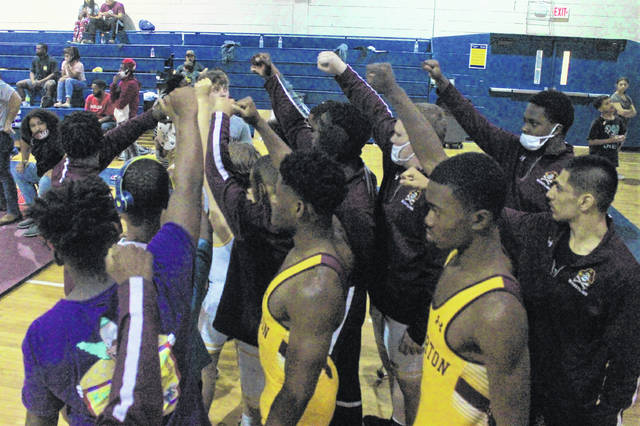 The Lumberton wrestling team huddles during Friday’s match against Cardinal Gibbons in Lumberton. 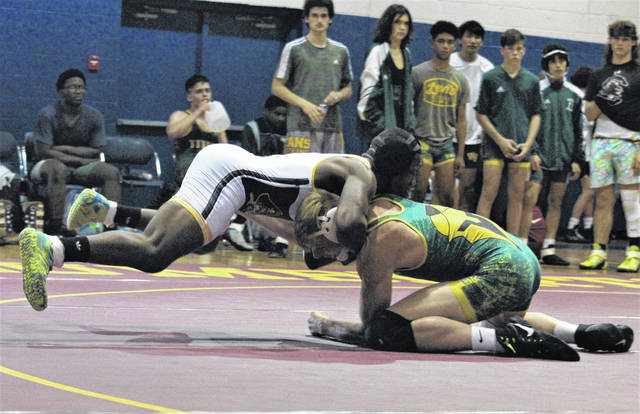 LUMBERTON — Wrestling is, by its nature, an individual sport. Even team competitions boil down to the results of individual matches.

But when that group of individuals can bond together as a team, lifting each other up, special things can happen.

It’s happened this season for Lumberton.

“That’s kind of my big focus; if you’ve got a good team chemistry with those individuals, they’ll build each other up, like a rising tide lifts all boats type of situation,” Lumberton wrestling coach James Bell said. “My thing is always I’ll leave the individual stuff to the individual, but as a team, I’m going to be all about the team. If I can get the team to be a top-tier team, then there will be top-tier individuals.”

The Pirates finished a 15-1 regular season Friday, the best record in school history, and went 7-0 in the Sandhills Athletic Conference, winning the first conference title in program history.

“It’s been a battle this season, but it’s been a pretty good season,” said senior Darionte McLaurin, who is 15-1 this season and ranked eighth in the state. “We’ve worked hard, and got what we deserved.”

A solid blend of youth and experience has been key for the Pirates. In addition to several seniors, Lumberton has had key contributions from several freshman, and some other wrestlers who are in their first season in the sport.

“It’s been kind of a perfect combination for us; we had a good group of freshmen come in, we’ve got our seniors that have been developing for the past four years,” Bell said. “We had a couple of guys that never wrestled before but stepped up and have been doing well for us; Ma’Kya Kerns and Quintez Shipman are both first-year wrestlers.

“There’s only five kids on the team that have wrestled a season of high-school wrestling before; everybody else is either a first-year guy or this is their freshman year of high school. It’s just been a perfect combination of all those things for us; good coaching, a good group of guys, and we’ve been doing well.”

With that variety of age and experience, the Pirates have come together well, turning Bell’s team-first philosophy into a lot of wins.

“We focus on team a lot, really,” said freshman Jackson Buck, who is 14-0 and ranked No. 9 in the state. “At the match, we break each other out. We support the team.”

“It’s like an extra boost of confidence when you’ve got your guys riding for you too,” said senior Davieyon King-McAllister, who is ranked eighth in the state at 11-3 and is signed to wrestle collegiately at Bluefield State.

And from that team success, wrestlers are being recognized for their individual achievements. Buck was named SAC Wrestler of the Year after his undefeated season, and eight others were named to the All-SAC team: Marcus Billups 8-1 at 106 pounds; Kerns at 113; Matt Foil 8-1 at 126; King-McAllister at 152; Josh McLaurin 11-2 at 160; Darionte McLaurin at 170; third-ranked Kenson Sinclair 12-1 at 182 and Shipman at 195.

Bell was named SAC Coach of the Year for the third time.

Preparation has been the key to the Pirates in having a special season.

“How hard we work in the wrestling room — that’s really where it’s at,” Darionte McLaurin said. “We work hard and grind. We came together.”

And from that hard work on the practice mat has come special moments in competition, including a 37-36 win over No. 2 Pinecrest which solidified the Pirates’ place atop the SAC.

“That was really exciting, especially at home in front of the crowd; especially losing our 120, having a hole, and boom, we still won,” King-McAllister said. “Pretty nice.”

“It was a good, hard battle,” Bell said. “About as good a battle as you could get between two high-ranked teams.”

A win over Jack Britt, another traditional SAC power, was also key in the Pirates’ conference title.

“One of my goals every season is to try to be the best team in the conference, beat everybody,” Bell said. “So those have been some big matches we’ve had, good indicators of where we’re at as a program.”

“You had two historically-good programs, good individuals, known throughout the state about being good teams,” Bell said. “We’ve been preaching it all week, ‘hey, these are big teams, this is a big opportunity.’”

Against West Forsyth, the Pirates won every individual match that was contested except for one, with two Titans wins coming by forfeit.

The Pirates trailed Cardinal Gibbons 13-0 early in the nightcap and came from behind to earn the win.

The first three Pirates wrestlers, Foil, Rodriguez and Ivey, all lost their matches. Buck and King-McAllister won by fall and Josh McLaurin and Darionte McLaurin both won by forfeit.

Traveon Moore lost by fall, but Shipmand and Andre Bethea both won by fall. Hardin lost by decision before the last three matches were decided by forfeit, with Lumberton’s Marcus Billups and Kerns winning.

Lumberton now turns to the postseason. While there will be no dual meet state playoffs, due to the truncated schedule caused by the COVID-19 pandemic, individual state tournaments will still be held. The 4A Mideast Regional will be June 15 in Fuquay-Varina, and the state championships will be held June 26 in Kernersville.

“You’ve got to give it your all, because I’m not trying to go in there with no regrets, having any regrets,” Darionte McLaurin said. “Just put it all on the mat, get that ring and get off.”

“We’ve just got to take more risks,” King-McAllister said. “We can’t be afraid to take risks, can’t be nervous, because it’s your last year.”

The Pirates have had six wrestlers individually qualify for the state tournament in the past; they’re hoping to exceed that number this year.

“We’re going to train for the next two weeks hard; I expect to see some good things. Our goal is always to do better than we have before … so that’s our goal right now. We’ve got some guys that I think they can do it; we’re just going to train to get everybody else there too.”

It’d be the perfect way to cap a season full of firsts.