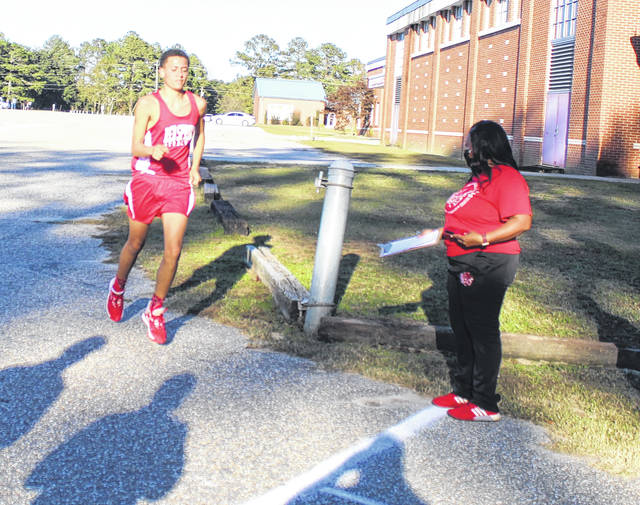 Red Springs’ Noah Chavis looks down at the finish line just before crossing it to finish second during Friday’s cross country race at Red Springs. 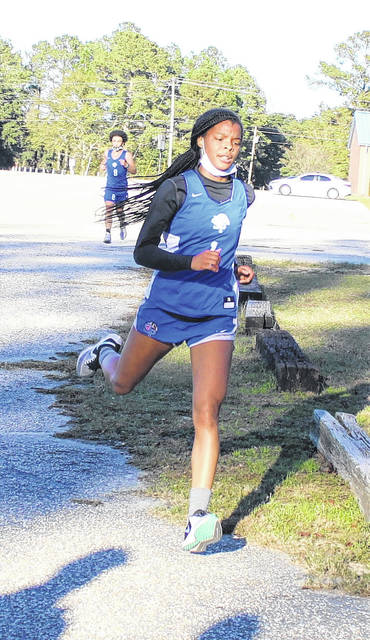 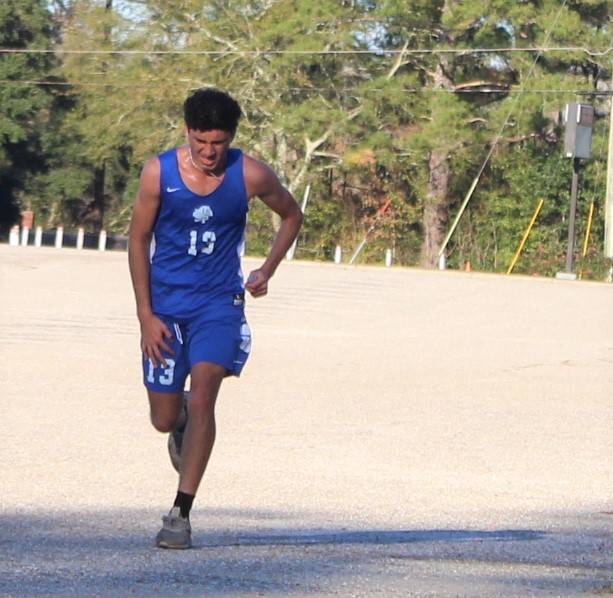 St. Pauls’ Shaun Emanuel holds his side as he struggles towards the finish line during Friday’s cross country race at Red Springs.

RED SPRINGS — Red Springs cross country runner Noah Chavis was one of the last runners to arrive at the team’s home meet Friday against St. Pauls and West Bladen.

But even without much of a warmup, he was one of the first to cross the finish line.

Chavis finished second in the meet, behind West Bladen’s Keagan Havaldson, and led the Red Springs team to victory.

“I got here kind of late … you know how that goes,” Chavis said. “They said, ‘come here and get on the (starting) line,’ so I just ran the race.”

Chavis ran the 5K race in 20 minutes, 27 seconds, a 2-second improvement from his time in the Red Devils’ season opener on the same course Monday. He finished 46 seconds behind Havaldson, who won in 19:41. Shaun Emanuel from St. Pauls was third in 21:00.

“I see how everybody starts off sprinting and everything,” Chavis said. “So I let them go ahead and do what I’ve got to do, and by the time I get to the graveyard site, it’s like I catch a second wind, and I do my thing and keep on.”

Jacob Bryan was West Bladen’s other runner and finished in 29:43.

In the girls race, St. Pauls’ Jakieya Thompson won by over a minute over the second-place finisher with a 5K time of 25:16.

Even with the sizable win, the race was challenging for Thompson in the Bulldogs’ season opener. With the different athletic schedule caused by the pandemic, it was the team’s first race in over a year.

“It’s been harder, we haven’t been at a cross country meet in a while. It’s difficult,” Thompson said. “(I had to) keep the pace up, don’t slow down, keep my breathing steady.”

West Bladen won the team event as the only team with five finishers; St. Pauls had two runners who did not finish and Red Springs had one. Second place was determined by the placements of the remaining teams’ top three runners; Red Springs finished second with 15 points in that format and St. Pauls third with 17.

Red Springs runners finished second and third; Dayanara Tellez was second in 26:24 and Elora Oxendine was third in 26:39. Hancey Trochez was the Red Devils’ other finisher, in 10th at 32:06.

Red Springs and St. Pauls both compete again on Dec. 2, with the Red Devils hosting a meet and St. Pauls competing in a meet at Luther Britt Park in Lumberton.

A Friday meet at Luther Britt Park in Lumberton was won by two individuals from East Bladen.

In the boys race, Aaron Smith ran the 5K distance in 18:04 to win by nearly a minute and a half over Whiteville’s Brandon Nguyen, who finished in 19:30.

In the girls race, East Bladen’s Cate Devane won with a time of 26:03.

Whiteville’s four runners were led by fifth-place Maria Rojas, who finished in 31:42.

Fairmont won both races as the only school with five finishers.