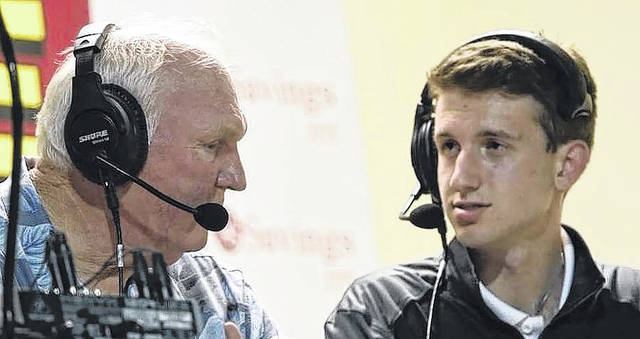 PEMBROKE — Through his young sports broadcasting career, Jon Gross has been fortunate to interview some big-name subjects.

He’s added several big names to that portfolio in a short period of time in recent weeks.

“It’s been a lot of fun speaking with so many incredible people from the sports industry,” Gross said. “I just love speaking with people and learning about their experiences, and everyone has such an interesting story, and I just try to get their story out and told, and I love doing it.”

Before returning to Pembroke from his native New Jersey, Gross hosted a Facebook talk show during the hiatus caused by the COVID-19 pandemic. On that show, he interviewed Fox Sports broadcaster Tim Brando (perhaps better known locally as the former syndicated voice of the ACC with Raycom Sports), Duke radio play-by-play man David Shumate, Dave Revsine of the Big Ten Network and Jessica Holtz, an agent with CAA Sports.

Other big names Gross has interviewed in the past through his various roles include former Philadelphia Phillies manager and World Series champion Charlie Manuel and former NBA player and coach Mike Dunleavy.

While Gross has interviewed some very accomplished individuals, he says he’s not intimidated by any interviewee, and hasn’t been since the first big interview he did as a sophomore at Penn State — the Nittany Lions’ head football coach, James Franklin.

“I had been interning for these two former Penn State football players that started a Penn State sports media company, and we were at an event, and out of nowhere they were like, ‘Jon, come with us, you’re going to interview James Franklin,’” Gross said. “I had no preparation; I’m a lifelong Penn State fan, so this is someone I looked up to and had a lot of admiration for, and on the cuff I had to interview James Franklin. I have to say it probably wasn’t a great interview, but ever since then I have not been intimidated of anyone I’ve spoken with.”

For the recent, less impromptu set of interviews, Gross has been prepared, estimating he spends an hour or more in preparation for each interview.

“All of them, I did research and would formulate questions, and obviously would have an idea of where I wanted to steer the conversation, but really allowed them to dictate where we’d go too,” Gross said. “I asked a lot of good follow-up questions, I listened to their answers, but I think research is important. Because when they hear me ask a good question, and drop a tidbit of information, I think that allows them to open up and say ‘OK, this is clearly a conversation where we both understand each other.’”

While the Cash Bash interviews were set up by the UNCP Athletics, Gross used varying degrees of connections to book guests on his show. This ranged from Holtz, the sister of Gross’ girlfriend, to having previously met Shumate and Revsine, to Brando, who Gross had previously conversed with over social media and reached out to via direct message.

“They’re willing to help, whether it’s on-camera or off-camera, whether they know people are watching or whether it’s one-on-one with just myself and them,” Gross said. “They’re just genuine people, and I think that’s a major reason why they are where they are today, because they’re quality people.”

While Gross did say he particularly enjoyed the Whittenburg interview — in part because “Survive in Advance”, the documentary co-produced by Whittenburg about N.C. State’s 1983 national championship, is his favorite of ESPN’s 30 for 30 films — he said there isn’t one “favorite” interview of his recent run because all of the guests were enjoyable.

“All of them were phenomenal people to speak with, and I can’t really put one over the others because all of them in their own right were unique and special,” Gross said.

Gross has returned to UNCP for a second school year, a very different location from where he’s from, just outside New York City in northern New Jersey, and where he went to school at Penn State.

“UNCP is a special place,” he said. “The people here, in the town and at the university, in the athletic department, are incredible. They’re so welcoming, they’re helpful. I love working with our great student-athletes and coaches, and showcasing what they can do. For me, just the opportunity to come back and work with all these people again, and live in Pembroke and also grow as a broadcaster, I’ll get plenty of on-air reps and get better, as a play-by-play broadcaster, as an interviewer; I couldn’t turn it down.”

Among Gross’ role models in broadcasting are CBS Sports and Brooklyn Nets broadcaster Ian Eagle and Penn State radio play-by-play man Steve Jones, but he also looks up to ESPN’s lead college football announcer, Chris Fowler, not just because of Fowler’s work but because of his role, which Gross sees as his ultimate goal.

“The way Chris Fowler can relate to the viewers and just weave in those great storylines and bring the energy when he needs to, he’s special,” Gross said. “The end goal for me, without a doubt, is to broadcast college athletics at a very high level. I’d like to do what Chris Fowler does, that’s my dream job. My lock screen on my phone, this may sound corny, but it’s the ESPN college football logo. So I turn on my phone and I want to envision my dreams right there.”

While the immediate future in the sports media industry holds some uncertainty due to the pandemic — Gross lost a broadcasting job with the Saugerties Stallions, a collegiate summer baseball team in upstate New York, when the season was canceled — Gross hopes to continue getting better with the experience he’ll get this school year in Pembroke.

“I just hope that I keep getting better every day, try not to focus on all the craziness around me, and just try to get better,” he said. “And put myself in a position that once sports returns full-strength and they’re looking for broadcasters and there’s jobs out there, that I’m in a position where I can find an opportunity and get that position and excel.”