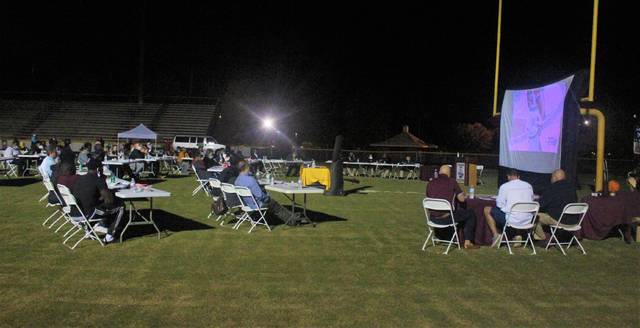 The Lumberton High School boys basketball team and their families watched the broadcast of the East Regional final against Pinecrest during the team’s ring ceremony Monday at Alton G. Brooks Stadium. 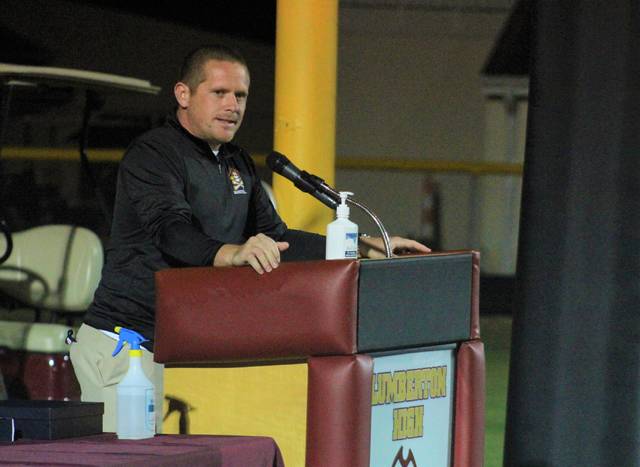 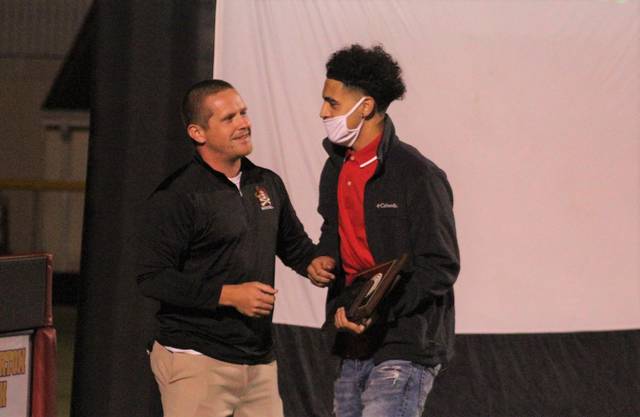 Lumberton boys basketball coach Bryant Edwards gives Jordan McNeill a pat on the back after giving him the team’s Most Valuable Player award for the 2019-20 season at the Pirates’ ring ceremony Monday at Alton G. Brooks Stadium. 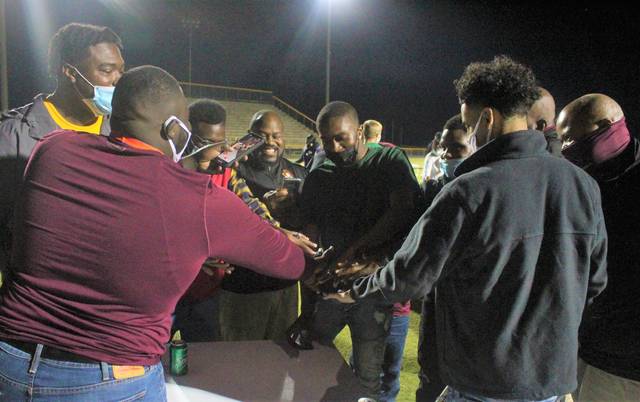 Lumberton players and coaches huddle up for a photo-op while wearing their state championship rings after the team’s ring ceremony Monday at Alton G. Brooks Stadium. 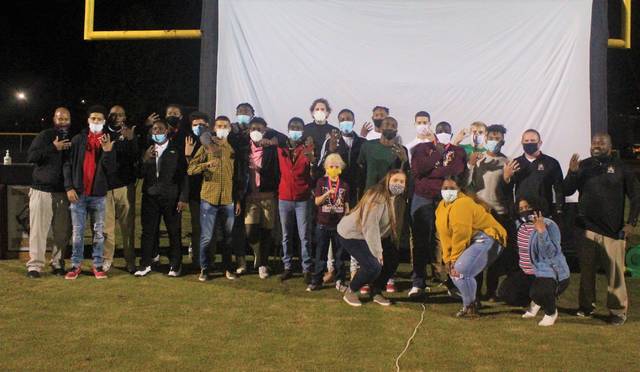 LUMBERTON — The Lumberton High School boys basketball team’s chance to play North Mecklenburg for a state championship was abruptly taken away when the COVID-19 pandemic changed the world in March.

The circumstances also left the Pirates without an opportunity to celebrate what the team accomplished.

Monday night, the Pirates finally got that chance.

After the North Carolina High School Athletic Association in April declared all state finalists as co-champions, the Lumberton team received its state championship rings in a ceremony Monday at Alton G. Brooks Stadium.

“I hate that it’s taken so long — we wanted to do something bigger, something more special — but it ended up we could get everybody together and do something on the football field,” Lumberton coach Bryant Edwards said. “But to get everybody back together, that was special. I haven’t seen some of these guys in a couple months, so just to see them and tell them ‘hey, I love you’ and everything, it was pretty special tonight.”

The players seemed as excited to simply be together, given the circumstances of recent months, as they were to celebrate what the accomplished earlier this year.

“It’s exciting to see all these boys faces again, to see everybody here healthy,” said Jordan McNeill, now a freshman at The University of North Carolina at Pembroke. “I haven’t been to Lumberton in a minute, even though I’m just down the road, so it’s good to see this town again.”

“It just feels good to get back together with the whole team,” said Jadarion Chatman, now a senior. “Everybody’s happy to get the rings. We’ve been waiting for a while, but now we’ve finally gotten them, finally got to see them. So it’s great to fellowship with everybody again.”

The broadcast of the Pirates’ East Regional final against Pinecrest was played while the players ate dinner at the ceremony, allowing them to relive the game that got them in position to ultimately be crowned co-champions.

“It feels really special that they talk about everybody (on the broadcast) and everybody was really supportive,” said Charlie Miller, now a senior, whose half-court shot at the halftime buzzer against Pinecrest was one of the memorable moments of the championship run.

“When people see my shot or whatever, they always cheer. And, you know, just for them to talk about everybody, all the players, during the game, and to have everybody here just celebrating, it’s really cool to just come back and relive everything.”

“That was a good idea (to show the game),” Edwards said. “It just gave the guys kind of a flashback of what it was and how it felt and the environment it was.”

During his remarks, Edwards recalled how much the Lumberton community supported the team during its run in February and March.

“What this team did for the community was really special,” Edwards said. “This is the first time I’ve seen a community so close. This team brought everybody together.”

Edwards repeatedly said in presenting the awards that each of them had several players who were deserving of the honor.

“Matt Locklear, Mike Todd, Dwayne Davis and a couple more, they deserve an award,” Edwards said. “I wish I had more awards to give out, because those guys were heavy-minute guys, and they deserve something too.

McNeill also received a scholar athlete award from an outside organization and his Sandhills Athletic Conference Player of the Year Award. Miller was given a Sportmanship Award from the NCHSAA.

Lumberton finished the season with a 26-5 record after an 11-3 run through the Sandhills Athletic Conference. They reached the ill-fated state final after defeating Pinecrest 66-47 in the 4A East Regional Final on March 7 at Fayetteville State University. That game was the fourth straight in the Pirates’ playoff run they won as the lower seed.

After beating the defending state champion South Central 59-54 at home in the first round on Feb. 25, the ninth-seeded Pirates beat No. 8 Apex Friendship 77-74 on the road two days later.

Nearly seven months after their final game, Monday gave the Pirates a chance to reflect on their unprecedented season and the first boys state championship in school history.

“It’s really remarkable. When I took the job (in 2019) this was not something that was in the plans,” Edwards said. “Now, it was definitely in the plans, hopefully for a couple years (from now), but me and coach Smiley (Porter) talked at the beginning of the year, ‘man, it’d be awesome if we could come in and win the league or do really well this year, because Lumberton basketball hadn’t done that in so long,’ and I think we did something pretty special.

“But it was just the guys bought in. If they buy in, the coaching staff buys in, then you can do some special things.”