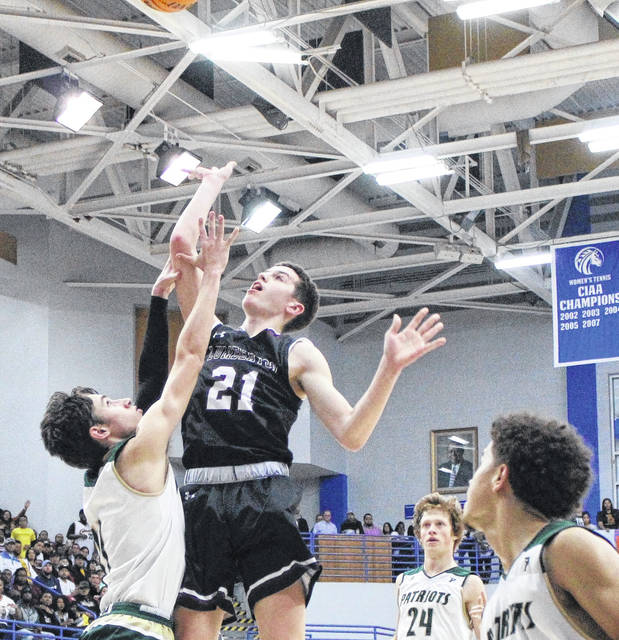 Matt Locklear takes a runner in the paint over a Pinecrest defender in the NCHSAA 4A East Regional final in March. The Pirates won the game to earn a berth in the state championship game. Because the game was canceled, the 2020 Lumberton boys were named state co-champions, the school’s first state title since 2001. Locklear’s older sister, Cheryl, was a part of that team. 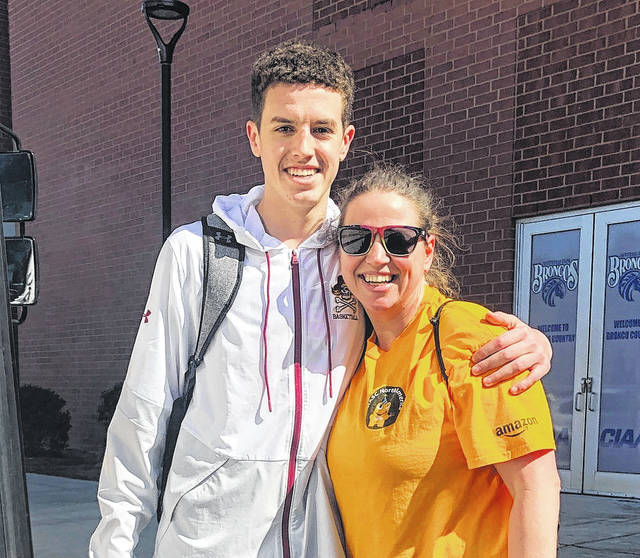 Matt Locklear poses with Cheryl Locklear outside of the Fayetteville State’s Capel Arena after the Pirates punched their ticket to the 4A state championship game in March.

LUMBERTON — Matt Locklear and his older sister Cheryl faced off in one-on-one basketball games growing up, with the older sibling coming out on top most times until recently.

When Matt, now a junior at Lumberton High School, started getting older and taller, Cheryl, a 2002 graduate from Lumberton, knew she had her hands full, but always had the last word.

“It’s been a running joke in our family ever since Matt came to high school that he would always challenge me to do one-on-one. And the few times that he would win, I’d tell him that it didn’t matter because he wasn’t a state champ,” Cheryl said.

Now, Cheryl can’t use that ring from the 2001 state championship to one-up her brother in pickup games.

Matt was an important role player off the bench and inside for this year’s Lumberton boys basketball team that was awarded the NCHSAA 4A boys co-state championship last month. The title was the first for Lumberton High School since the girls basketball team claimed the 2001 4A state title, with Cheryl playing a similar role for that Pirate team as Matt did this year.

“It feels great knowing that I’m a champ and she’s a champ,” Matt said. “It’s a blessing.”

The brother and sister pair are the only siblings from Lumberton to have a state championship, with both winning state titles as juniors, but 19 years apart. The similarities go farther as both were key reserves on their teams.

“I always subbed in for Billie McDowell. She was one of our starters and our top scorers and she got a full ride to play at (NC) State,” Cheryl said. “My job was to come in and maintain defense and score a couple baskets if I could. It was mainly to give her that rest and that break.”

Matt wasn’t born when Cheryl was coming off the bench to give McDowell a breather, but he’s heard the stories of one of his on-the-court role models.

“I heard they were good and when they would go play teams that they would blow them out every single time,” he said. “I heard she was a good defensive play. She would dive on any ball anytime. She was a good rebounder for them.

There isn’t many memories that Cheryl doesn’t remember about that 2000-2001 season, she said, from the Saturday morning practices to the limited time off. To claim the championship, both teams required dedication.

“It was such a fun experience to grow up and experience that entire scenario with that group of girls. A lot of people don’t understand all the hard work that goes into making a run for a championship,” Cheryl said. “Basketball was a way of life because you knew if you wanted to be a champion, you had to put in the time and that wasn’t just during the basketball season.

“We were just doing all the little things behind the scenes so that way when we got to the Dean Dome for that championship, you knew you were ready and you knew the girl standing beside you was just committed as you were.”

The Dean Smith Center in Chapel Hill was where the 2020 Lumberton boys were set to play North Mecklenburg on March 14 before the championship game as postponed and ultimately canceled.

“That’s the worst part of the whole situation. We all wanted a different outcome,” Cheryl said. “We would’ve loved to see our boys play in the Dean Dome, and it really is a special energy to walk out on that floor with a group of kids that you are there with, and know that this is your moment.

“It’s unfortunate they didn’t get that chance, but regardless, they are champions and they worked really hard to get where they did.”

Cheryl now lives in New Jersey, but made the trip down the week before the state championship when her little brother and the rest of the Pirates punched their ticket to the state title game with a blowout win over Pinecrest at Fayetteville State.

Making the trip with Cheryl to the game was that same championship ring she used to talk to her brother about.

“I always wear my championship ring. I keep it with me and it’s kind of my good luck charm,” she said. “On the days that he would play, I would wear it to work and it would be my little, ‘OK, I hope you do really well today.’

“I saw him after the game and we took some pictures. I told him, ‘I’m so proud of you and I hope you get the chance to earn this ring. I hope you get to be one of the few that can say they did this.’”

It wasn’t how this year’s Pirates wanted to, but the rings will be on their hands in a few weeks.

And now Matt knows the same satisfaction that Cheryl felt nearly 20 years ago.

“It feels good that you put all these hours in and it pays out,” Matt said.

While the championships is a point of pride for both Matt an Cheryl, the siblings say that they are equally as excited for their parents, Timothy and Jeannie Locklear. Cheryl said that Timothy was a major part of the love of sports for the pair.

“More than anything, I’m most happy for my dad,” Cheryl said. “I’m so excited that when he goes into the gym that he can point up at a picture and say, ‘That’s my daughter and that’s my son.’ It’s a special moment for him and all three of us.”

Matt said that early on during the Pirates’ playoff run that his dad at times caught himself looking ahead to what could be the end result.

“My parents are really happy for us. My dad was talking about in the beginning after we won our first game, he didn’t want to say nothing,” Matt said. “He was like, ‘I just hope.’ And it really did happen.”

In the future when rings are presented and banners are hung in the Lumberton gym, there will be emotions for the Locklear family that have a special tie to both of the basketball state championships. Cheryl said she hopes to take in all the moments with her little brother, and possibly present Matt his ring to complete the family’s matching set.

“I think it’s going to be an extremely proud moment. I’m so happy for him and so grateful that he has had that opportunity,” Cheryl said. “I can’t wait to be there for the ring ceremony.”

And as for those one-on-one games, Cheryl’s secret weapon will soon meet its match.

“Which means I’m going to lose a lot now,” she said.