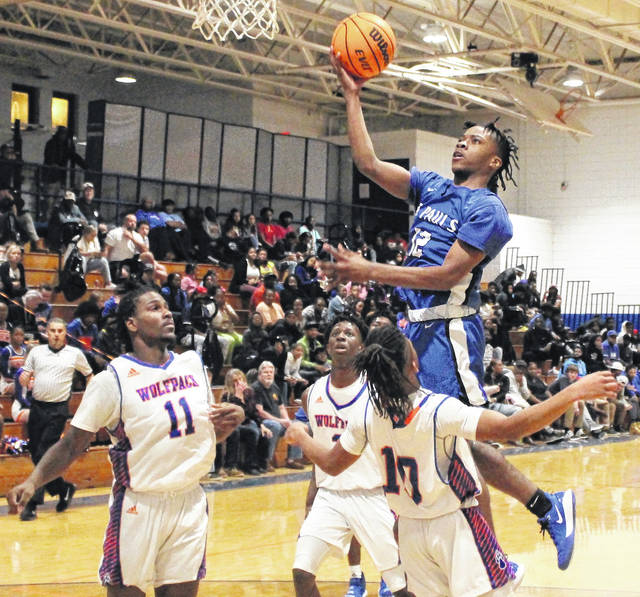 Jonathan Bym | The Robesonian St. Pauls’ Jeyvian Tatum goes up for a layup in a game at Whiteville this season. Tatum is Robeson County’s Underclassman of the Year.

ST. PAULS — Last year, as Jeyvian Tatum made the transition from middle school basketball directly to the high school varsity level, he faced an adjustment of playing with better teammates as a younger player.

This year, as a sophomore, Tatum became a better teammate — and in turn became a more productive player, too.

After helping lead the St. Pauls boys to a Three Rivers Conference regular-season title and the third round of the state playoffs, Tatum is Robeson County’s Underclassman of the Year.

“Jeyvian was really instrumental to our run,” St. Pauls coach Corey Thompson said. “His development from his freshman year to his sophomore year was incredible, leading us in scoring throughout the season, and just the contribution he brought towards our team was definitely something that was positive for our season.”

Tatum scored 10.3 points per game as the Bulldogs went 23-6 this season. His season included a couple of strong big-game performances, with 20 points in a win over Red Springs and 16 in the Bulldogs’ second-round playoff win against Dixon.

But Tatum’s value to the Bulldogs was also in rebounding and defense.

“Jeyvian can score and different things; he’s not just someone who can put the ball in the hole, he can also rebound very well, he’s a very good athlete, can defend,” Thompson said. “It’s more than just scoring; he brought other attributes to the team to help us be successful.”

That development came as Tatum was in his second varsity season after moving straight from the middle-school level to varsity as a freshman last year.

“Just trusting his teammates and having other guys that he can count on and and he can help them out,” Thompson said. “Coming from middle school, he was pretty much the main guy, so that transition from playing middle-school ball to jumping straight into varsity (last year) was tremendous. And his growth in his confidence; I think that was the most important thing was his confidence really helped him out.”

Thompson is excited for the continued growth he expects from Tatum over the last two years of his high-school career.

“Just continuing to get better, continued growth and improving his game. As he improves his game our team gets better. Not just being known as a scorer, but impacting the game in many different facets, on the rebounds, assists and the defensive side. I know that’s what Jeyvian will eventually become.”

Efforts to reach Jeyvian Tatum for this story were unsuccessful.