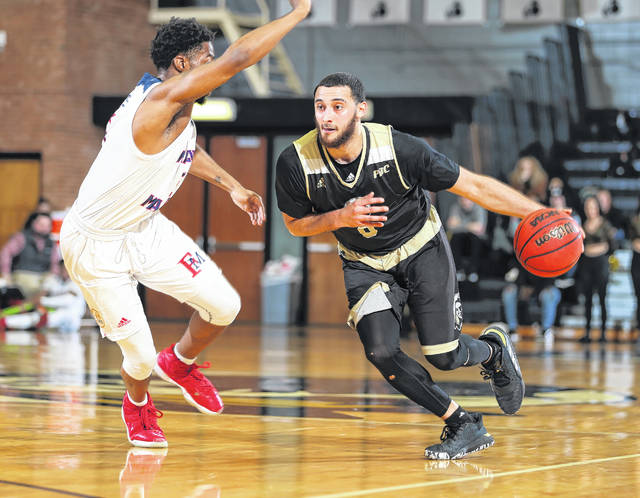 PEMBROKE — The road between Pembroke, where Jabrie Bullard plays basketball now, and Prospect, where he grew up, is just a few miles long.

But Bullard’s road from Prospect to Pembroke is much longer, with several stops along the way between his high-school years and his final collegiate season, currently in progress.

The redshirt-senior has played collegiately for four different schools, but is writing what is likely the final chapter of his competitive basketball career with his hometown university, The University of North Carolina at Pembroke.

“It’s been a great experience,” Bullard said. “(I’ve been) meeting new people everywhere I go, and then coming back home, I knew everybody. I came on the team and it’s just love from everybody, because I’m home. I kind of knew the players here before I came here, because I used to come here during the summer and play with them, work out with them. I’ve known Dave (Strother) since he was in middle school, so it’s like he’s a brother to me; knew Jordan (Ratliffe).”

Bullard graduated from Northwood Temple Academy in 2015, and played one collegiate season each at Williston State College, Caldwell Tech Community College and Newberry, starting 52 of the 89 games he played those three seasons. He redshirted the 2018-19 campaign after transferring to UNCP, playing this season for the Braves as a reserve.

“He’s a nomad,” Braves interim head coach Tony Jones said with a laugh. “Everywhere he’s been, though, he’s had a huge role, and he’s been starting. It’s been kind of a challenge; it’s a little different when you’re coming in and have a different kind of role. I know he’s used to heavy minutes and he’s a very good guard, but he’s learned to not only accept this role but taken it on; he’s like, ‘OK, when I come in the game, this is what I need to do, I need to produce.’”

This season, Bullard is averaging 14.6 minutes per game, scoring 5.2 points per contest with 1.4 rebounds and 1.0 assists. Season-highs in points (18) and made 3-pointers (six) came against his old team, Newberry, on Nov. 9, just his second game with the Braves.

In addition, Jones touted his strong defense, saying the team is comfortable with the 6-foot-2 Bullard guarding anyone on the floor.

“My favorite thing about him is he takes defense personal,” Jones said. “There’s been games where they tried to iso him, and he’s like, ‘nah, I’m taking the ball.’ He’s a shooter at heart, but defensively he’ll lock down. He’s athletic, and people second guess him, but he’s very smart with the ball, he’s a great player.”

Bullard left Williston State, a junior college in North Dakota, after a coaching change at the end of his freshman year, and came to Caldwell Tech in Hudson for his sophomore season to be closer to home; he averaged 9.3 points per game in each of his two junior-college seasons, with 5.5 rebounds and 2.8 assists per game at Caldwell Tech. After expending his junior-college eligibility, he transferred to Newberry for his junior year, averaging 5.8 points, 3.1 rebounds and 1.2 assists per game in 2017-18, before opting to finish his career close to home at UNCP.

Bullard says that easing the travel for his family, particularly his mom Kylene Chavis, has been a huge positive of playing for the Braves.

“It’s undescribable. I never thought I’d be back home,” Bullard said. “My mom used to try to travel to every game, and now it’s just four minutes down the street. It’s love, I love it to death. My grandmother couldn’t come to a lot of games (before), because she’s older, and now she’s almost at every game. I love it here.”

As he plays his senior year at UNCP, the Braves sit at 20-5 on the season with a Peach Belt Conference-best 14-3 league mark, and Bullard has gotten to enjoy a great team atmosphere.

“This is honestly the best team I’ve ever been a part of, and it’s on and off the court,” Bullard said. “Off the court, we do stuff together, not playing, we just link up and go places, everything. We’ve just got bonds everywhere possible.”

Bullard isn’t sure what’s next for him after he finishes his degree in sport management. But the immediate future for both Bullard and the Braves will be spent trying to win a conference championship.

“He has a lot of heart,” Jones said. “And just his road to get back to home and play in front of family and friends, and have the opportunity to have a great season, possibly win a ring, go deep inside the postseason, I’m super happy for him.”

“I’ve never had a ring, not in high school, I’ve never gotten close,” Bullard said. “That’s just a dream come true, if we really do that. That’s our goal as a team.”

And if UNCP does earn that title, Bullard will be the Brave who has traveled the longest road to reach that goal, even from just a few miles away.