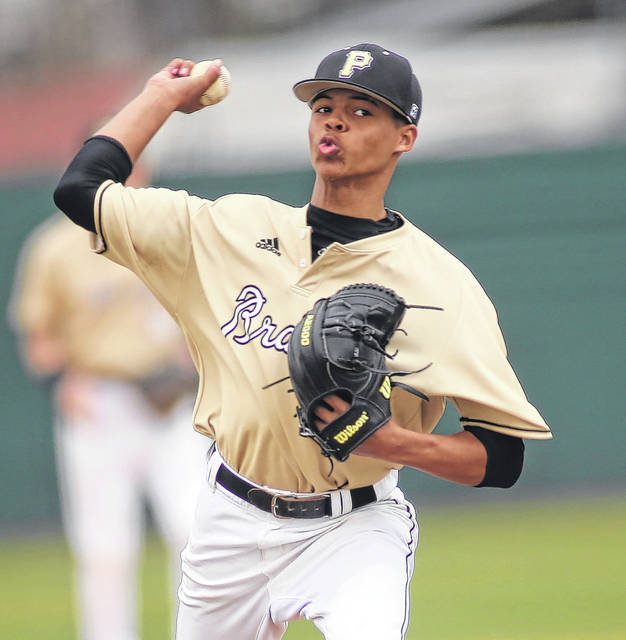 UNCP Athletics UNCP freshman pitcher Darren Bowen delivers to home against Chowan on Wednesday in his first collegiate start on the mound. Bowen struck out three in two innings on the mound.

PEMBROKE — Even with The University of North Carolina at Pembroke baseball team posting double-digit runs for the third straight game on Wednesday in a 14-3 non-conference home win against Chowan, coach Paul O’Neil still sees room for improvement in his offense.

“I’d just like to see some guys be more consistent and take what they are giving you,” O’Neil said. “The second kid they threw at us, this Cowan kid, he was throwing really slow. He went 3 2/3 (innings) and we didn’t get to him until the end. We’ve got to do a better job of making adjustments offensively.

“It’s just about being more disciplined and having more confidence. That’s the biggest thing. Some of our guys are good offensive players, but some of our guys aren’t making the adjustments or feeling good about ourselves in the box.”

The 20th-year coach for the Braves now shifts focus to Friday as UNCP starts Peach Belt Conference play on the road at Columbus State with a 4 p.m. first pitch.

UNCP (6-2) got a big lift from its offense in the final five innings of the win over Chowan (3-4) as the Braves scored 12 of their runs from the fifth inning on. The pitching staff showcased its depth and parity in the game, sending seven arms to the mound, tallying 16 strikeouts and allowing two walks as a staff.

“Pitching-wise, I’m very happy with how we are pitching the baseball,” O’Neil said. “We are really throwing the ball well. Guys are doing their job throwing strikes and hopefully it continues this weekend.”

Five runs came in the bottom of the fifth after Chowan posted two runs in the top of the frame to take a 3-2 lead. Ethan Baucom launched a three-run homer to put the Braves up for good before Jarratt Mobley’s two-run shot later in the inning pushed the Braves lead to 7-3.

Ryan added three RBIs and was the final arm of the night for the Braves as he struck out two Hawks in the top of the ninth to close out the win.

The Braves started the game with Red Springs grad Darren Bowen on the mound. After surrendering a solo home run to Jared Fry two batters into the game, the freshman locked in to finish his two innings of work with three hits and just the lone hit.

“I thought Darren did fine,” O’Neil said. “He gave up one hit. One hit, three strikeouts and he didn’t walk anybody.”

Tanner Routh earned the win on the mound for his one inning on the mound without surrendering a hit. St. Pauls grad J.J. Oxendine pitched the eighth inning for the Braves and struck out a Chowan batter.

St. Pauls grad Ted McNeill crossed home when he came on as a pinch runner in the eighth inning,

Chowan was led at the plate by Dallas Trevena with two hits.