LUMBERTON — The overarching message delivered to the crowd gathered Monday at the Bethany Presbyterian Church in Lumberton during a celebration of the life and legacy of the Rev. Martin Luther King Jr. was to move forward.

“That’s why I came here to Lumberton today, to tell you we’re moving forward. We’re not turning back. We’re moving forward,” said the Rev. Ricky Banks, president of the General Baptist State Convention of N.C. and the afternoon’s keynote speaker.

The celebration marked the first sponsored by the Robeson County Black Caucus since the year 2020. The return of the event began with a rocky start after one attendee suffered a medical emergency during the singing of the Negro National Anthem “Lift Every Voice and Sing.” She was escorted out by first responders and proceedings continued soon thereafter.

“Martin Luther King started in the church. It’s befitting that every time we come together to celebrate this day, we celebrate in the church,” said Helane Church, pastor of the Bethany Presbyterian Church.

During his sermon, Banks spoke of the 1950s and 1960s as a time when the United States was thriving after the end of World War II.

But this time was marred by the suppression of people of color.

“God always knows who to send at the right time.”

Banks was speaking of Martin Luther King Jr., who was one of the most prominent leaders in the civil rights movement since 1955 and until his assassination 13 years later.

During that period, King accomplished a great deal in the U.S. through a “grassroots campaign of peaceful protest and civil disobedience” which led to “tremendous change,” Banks said.

Today we face new battles which is why we must move forward, Banks said.

“Martin is not with us here today in person and the struggle is not over,” he said. “You’re still in this fight when you discover that Black households have 10 cents in wealth for every dollar held by white households … The majority of black Americans, some 92%, say whites benefits from situations black folks do not have … Black Americans are more like to die from gun violence and 14 times more likely than white Americans to be wounded. Evil is still among us.”

“We cannot allow the dream nor the dreamer to leave our memories.”

Following his sermon, Banks was presented with the proclamation by Councilman John Cantey on behalf of the Lumberton City Council. A check for $1,550 was also presented to the Robeson County Black Caucus.

“We are grateful for the work that she has done as county commissioner District 2, but not only in District 2 but across this county,” Gilchrist said. “I thank God for her because she works hard in the Democratic Party.”

Campbell thanked the caucus for the award but said there were many before her who paved the way.

“We did not get anywhere we are without coming on the backs of others,” Campbell said.

Speakers encouraged those to continue King’s message and keep the dream alive.

“‘A dream written down with a date becomes a goal, a gold broken down into steps becomes a plan, a plan backed by action makes your dreams reality,’” City Councilwoman Melissa Robinson quoted. “Don’t stop dreaming, keep going, be blessed.” 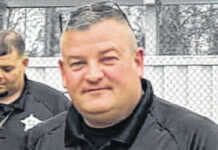 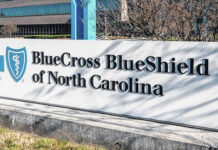 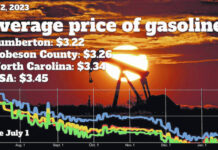