FAIRMONT — A survey conducted by the National Weather Service Friday has determined that a microburst is the cause of the destruction of two homes Thursday in the McDonald area.

“Microburst damage is typically aligned in the same direction from the burst’s point of impact ie. in a straight-line,” Steven Pfaff, Warning Coordination meteorologist for the National Weather Service, told The Robesonian Friday. “As a result, the damage pattern is usually along a path shorter than it is wide. Meanwhile, tornado damage is narrow compared to a longer path length.”

According to the National Weather Service, a microburst is a “localized column of sinking air (downdraft) within a thunderstorm and is usually less than or equal to 2.5 miles in diameter.” Microbursts can cause extensive damage at the surface, and in some instances, can be life-threatening.

No injuries were reported in the Thursday incident.

A resident of the McDonald area told The Robesonian his home was completely destroyed by what he believed was a tornado that touched down early Thursday morning.

“I don’t think it will recover,” Kenneth Wayne Hunt said Thursday of his home. “The roof, the floor, the bathrooms, all the commodes is blowed up; it was blowed off the foundation.”

The Robeson County Emergency Management director Stephanie Chavis was unsure Thursday of whether a tornado had in fact touched down.

“I was advised that there was some storm rotation near Florence but that rotation appear to have weakened as it moved across Robeson County,” Chavis wrote in a report of the incident Thursday.

At approximately 2:52 a.m. on Thursday morning, the 911 center received a call from a homeowner advising that possibly a tornado had hit the area, according to Chavis. Robeson County Sheriff’s Office, Robeson County EMS and Raynham Volunteer Fire personnel were dispatched.

Law enforcement reported that there were several power lines down in the area as well as a couple of power poles, according to Chavis. Emergency responders advised the 911 Center that two mobile homes had been moved from their foundation, one located at 3139 McDonald Road and the other at 3149 McDonald Road, and an outside building had been blown across the field adjacent from these two properties, Chavis reported.

A tree had fallen through the mobile home located at 3149 McDonald Road, occupied by Hunt and Barbara Caulder, as well as fallen on a car sitting in the front yard. A neighboring home could be seen Thursday with foundational damages and a mangled trampoline.

At 11 a.m. there were more than 70 Robeson County residents without power but all power had been restored by noon, according to Chavis.

“The 911 Center made contact with me around 0300 to make me aware of the situation,” Chavis said. “I made contact with the National Weather Service to inquire as to whether or not a tornado was spotted on the radar for Robeson County.”

The National Weather Service will decide on whether to conduct a survey of the incident based on information received from Robeson County Emergency Management. 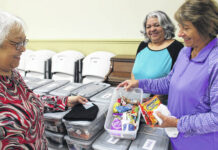 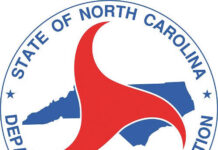