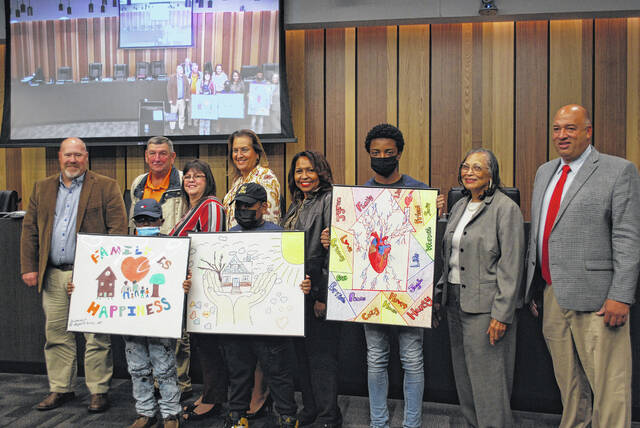 Robeson County Housing Authority “What Home Means to Me” contest winners Braylon McNeil, left, and Aden Casiano, middle, and Jyron Murphy stand Monday with Robeson County Commissioners during a regular meeting in which the winners were recognized. 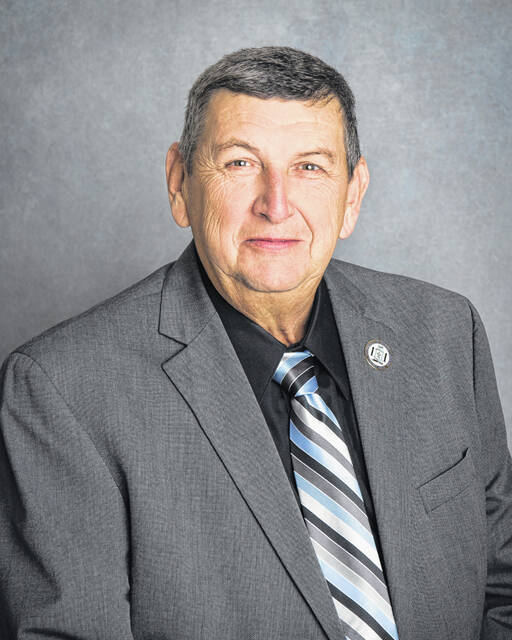 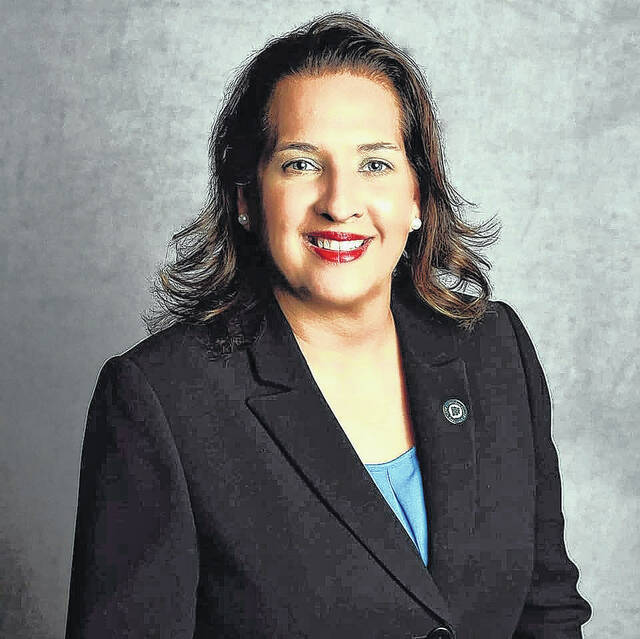 Editor’s Note: The Robesonian was contacted Nov. 17 and told that John Graves, of Best Friends Animal Society, received complaints from Robeson County residents about the number of animals in the county and lack of resources available to them. Graves did not clarify during the meeting that he was not speaking of the Robeson County Animal Shelter.

LUMBERTON — Robeson County Commissioners punted Monday a decision to move forward with the construction of a Dollar General at N.C. 41 and Allenton Road after hearing concerns from residents in the area.

Robeson County Commissioner Tom Taylor made a motion to table the idea after a public hearing in which four residents of the community spoke against the construction.

David Cox, a community resident, said he is concerned about customers at the prospective Dollar General blaring music or operating loud vehicles while a funeral is being hosted at the cemetery adjacent to the proposed business site’s property. He also said multiple schools in the area and a day care would be affected by the store.

Sarah Britt lives across the street from the site and is concerned about robberies and violence occurring closer to home.

“They have many problems at Food Lion and Dollar General three miles down the road,” Britt said.

Diane Russ voiced concern for violence already in her community and how adding the store could increase the violence and affect her grandchildren as they grow up. She also said a trailer park in the area has caused problems and that she doesn’t want more crime.

Taylor said he desired to speak to more people about the project. He and Commissioner Wixie Stephens left the room briefly to speak to the residents following the public hearing.

“People who live out of town need convenient stores where they can run in an get milk and bread and aluminum foil,” said Thomas Neville, a Fayetteville attorney who spoke in favor of the store.

John Parker, project manager at Rhetson Companies Inc., said the store “felt like a good fit for the area.”

The store was recommended by the Robeson County Planning Board. Fencing is to be placed around the store.

In other matters, commissioners approved a special use permit to allow a family cemetery to be established in a Residential Agricultural District on Red Hill Road. Commissioner David Edge was not present Monday and did not vote. Stephens and Taylor also had not yet returned to the room to vote on the item.

Also approved by the commissioners was the amendment of Section 3.14 of the Robeson County Zoning Ordinance.

“It’s a clean up on a play of words that’s what it is,” said Jackie Eason, assistant director for Robeson County Community Development.

The amendment includes a subsection that states property under the section must be at the corner of state maintained roads. Before the amendment, the section used the word “if.” The amendment makes the ordinance compliance with state statutes, said Robeson County Attorney Rob Davis.

“We went in and cleaned that up to make it clear,” Eason said.

Also on Monday, commissioners were invited to the retirement ceremony of Barbara Huggins on Jan. 3. She will retire with 27 years of service in various roles to the Robeson County Housing Authority. Huggins serves as the RCHA’s Finance specialist.

Niakeya Jones Cooper, executive director of the RCHA, stated that the Housing Authority’s nonprofit entity “Robeson Development Corporation, Incorporated” was approved by the state in October.

The nonprofit will allow the Housing Authority to seek more funding to address housing needs, she said.

Cooper also told commissioners about various events held within the RCHA locations in the county. As part of Housing America Month in October, various events were held including a poster contest titled “What home means to me.” The contest compelled participants to create an art piece on a poster board and compose a short description of the meaning of home.

“All I can say is thank-you,” Taylor said.

Commissioner Lance Herndon made a motion to accept the information items offered by the RCHA and extend a formal congratulations to the three contest winners.

In addition, 96 were signed up for a free spay-neuter program and 75 put on a waiting list for the next round once more funding comes through to allow BFAS to pay for the program, Graves said.

Graves told commissioners he hasn’t gotten far with the Robeson County Health Department, which manages the Robeson County Animal Shelter. He told commissioners he has heard negative comments from the public concerning the shelter. Graves also said some county residents voiced frustration with the number of animals in the shelter and lack of services.

“It’s a very clean facility,” he said of the shelter.

Graves also spoke highly of the staff who are “doing everything they can.” However, he expressed frustration with management.

Graves said the BFAS will continue to work with the county and within its rescue organizations to prevent euthanasia of animals. He stated the organization has poured more than $120,000 into the county this year alone to help save the lives of animals.

BFAS is a nonprofit organization committed to ending euthanasia of animals. Robeson County leads the state in euthanasia rate.

“We certainly appreciate your effort,” said Faline Dial, the chair of the Robeson County Board of Commissioners.

FAIRMONT — Pauline Campbell, widow of the late Robeson County Commissioner Berlester Campbell, was elected Thursday to take her husband’s seat during a meeting of the District 2 Democratic precincts. Campbell defeated Hubert Sealey by […]

LUMBERTON — During a meeting Monday that lasted less than 30 minutes, Commissioner Roger Oxendine urged the Board of Commissioners to get help improving traffic safety in the Five Forks area.

LUMBERTON — A property off East Fifth Street is not the place for a proposed 72-unit public housing complex, says one council member who plans to speak against it during Wednesday’s Lumberton City Council meeting. […]