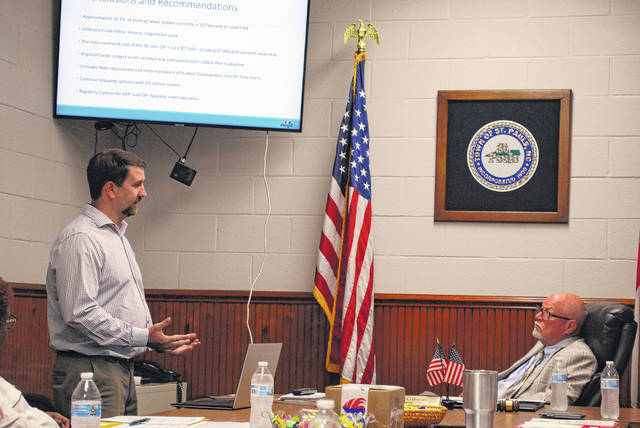 David Honeycutt, of McGill Associates, speaks Thursday to St. Pauls Mayor Elbert Gibson during a presentation on the condition of the town’s sewer system, including needed repairs. Honeycutt made his presentation during a regular business meeting of the town Board of Commissioners. 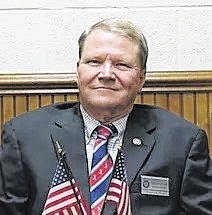 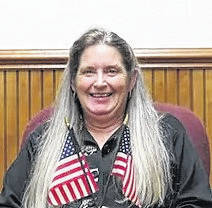 ST. PAULS — Commissioners here adopted a Fiscal Year 2021-22 spending plan that includes a raise for town employees and no increase in water/sewer fees.

The plan also includes a 3% cost of living adjustment for town employees that goes into effect in July. Mayor Pro Tem Evans Jackson said town employees have received about a 6% increase this year alone.

“Like I said, I don’t have a problem with it, but that’s way ahead of the cost of living in places, which is — I’m glad we’re able to do that,” Jackson said.

Also approved Thursday was a contract with McGill Associates to perform engineering services for the town’s wastewater regionalization feasibility study.

Commissioners also heard from David Honeycutt, of McGill Associates, who presented the findings on the condition of the town’s sewer system, as part of an asset inventory project. The repairs needed to the system carry a price tag of $13,907,690, which would be paid over the next 10 years.

However, funding already acquired in other projects takes about $7.7 million out of that number, he said.

Honeycutt suggested the town tackle the repairs by continuing to seek loans and grant funding, as it has for other projects.

The sewer system spans about 99,645 feet, which is 18.7 miles of town, Honeycutt said. There are 341 manholes and 12 lift stations. And 46.1% of the system’s piping is vitrified clay pipe, which has deteriorated over time and is “beyond its useful life.”

The wastewater regionalization project, which seeks to relocate the wastewater treatment plant out of a 100-year floodplain and rebuild the plant, was not accounted for in the number, he said.

“Most of it is in poor condition,” he said of the current wastewater treatment plant.

Assistant Public Works Director Benton Rogers said the $1.6 million sewer project is underway. He also said more work will be done to progress the stormwater project, including sending a map to the state to help the process of obtaining property easements.

“Other than that, it’s raining every day. We’re trying to work between rain storms,” he said.

Also approved Thursday was adding a $25 permit fee for itinerant merchants. The fee does not apply to the farmer’s market or an ice cream truck operation.

Interim Town Administrator Debra McNeill said she received the resignation of John Guduaskas Sr. from the town’s Planning Board. In his letter, Guduaskas wrote that he has served on the board for more than 30 years and that the board needs “new faces and fresh ideas” to guide it forward.

McNeill said the term limits must be reviewed by the board soon. Planning Board terms are for three years.

The interim town administrator said she spoke to Robeson County Board of Elections Director Tina Bledsoe about the ballot that includes selling liquor by the drink, and was told that Bledsoe was waiting for House Bill 722 to be adopted. House Bill 722 is legislation to direct the North Carolina Alcoholic Beverage Control Commission to allow growlers up to four liters. A growler is, in the United States, a glass, ceramic, or stainless steel bottle used to transport draft beer.

House Bill 722 was given final approval by the N.C. House on May 6 and sent to the Senate. As of May 10, the legislation was in the Senate Rules Committee.

McNeill told Bledsoe the town is interested in hosting the election for liquor by the drink in November if possible.

Commissioner Donna Patterson asked about an ordinance on above-ground pools that specifies the need for fencing. McNeill said it is a state ordinance that should be overseen by insurance agencies, but she said she would look into it further.

Commissioner Jerry Quick said the Appearance Committee asked about cameras being placed at Sugar Park, which was vandalized recently. No action was taken.

He also asked for someone to look into a garage on N.C. 20 that has “too many cars” on the lot.

Jackson said he counted 23 cars on the property on Wednesday.

Commissioners also discussed the operation of the town’s website and updating it regularly. McNeill said the person who updates it simply needs to be given information to upload on the site.

McNeill said she didn’t have time to call the web operator with information on the website in addition to her other responsibilities.

“I would love for somebody to take it on,” she said.

Former Mayor Jerry Weindel said he would call in some information to be updated on the website.

LUMBERTON — A 2% cost of living adjustment hike for city employees and an increase in water/sewer fees for residents are in the Fiscal Year 2021-22 budget approved Wednesday by Lumberton City Council.