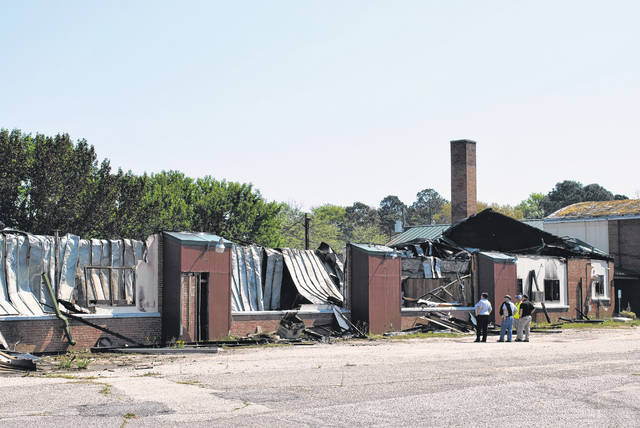 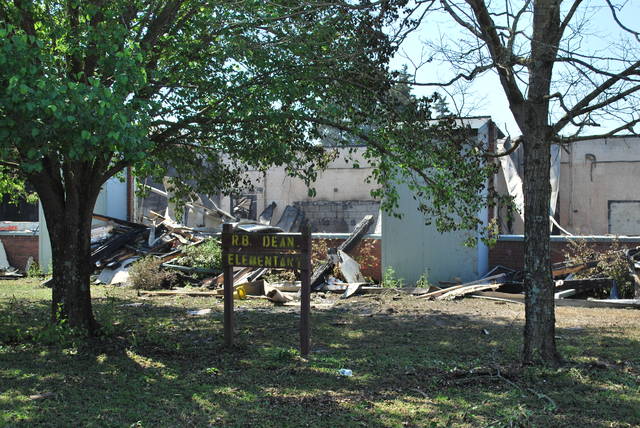 A sign stands Wednesday on the vacant campus of R.B. Dean Elementary School in Maxton after one building next to the gymnasium caught fire in the early morning hours.

MAXTON — The odor of smoke and the sight of ashes floating in puddles remained Wednesday morning at the Hooper Street campus of the now vacant R.B. Dean Elementary School after a fire destroyed one of its buildings.

First responders cleared the scene in Maxton about 11:15 a.m. The building was left vacant after the Public Schools of Robeson County Board of Education consolidated schools before the start of the 2019-2020 school year as one method of eliminating a $2 million budget deficit.

Communications received a call about a fire at the empty school about 4:45 a.m., and crews were dispatched to the scene, said Stephanie Chavis, county fire marshal and director of Robeson County Emergency Management.

The female caller said she could hear the school’s alarm going off, Chavis said.

“When she looked outside, she could see smoke and flames,” Chavis said.

In video footage Chavis viewed Wednesday morning, flames could be seen reaching through the top of the building, which is near the gymnasium and clearly visible from East Baldwin Street. Chavis arrived on the scene about 5:15 a.m.

The cause of the fire has yet to be determined, she said.

Aged wiring in the ceiling of the building and wood that contained fat lighter were factors believed to have contributed to the fire, Chavis said. But no foul play or arson is suspected.

“We are in the process of working with the proper authorities to assess the damages to the building and a cost estimate of those damages,” Burnette said in statement.

He was on the scene Wednesday morning helping secure the area and making sure barricades and caution tape were in place, Hammonds said. He also was taking photos of the firewalls, which were still standing on both sides of the building, the oldest structure on the school’s campus.

Hammonds commended the firefighters for a “fantastic job” in containing and extinguishing the flames as he took in the sight of smoldering materials that once were classrooms.

The Maintenance director called the sight devastating as he remembered a time when the building housed students, staff and teachers. He also said the scene was a sobering image of what can happen to buildings, and why the department must keep safety “first and foremost” in campuses across the school district.

Cynthia Jones, 62, heard the sirens Wednesday morning from her Patterson Street home, but thought it was an ambulance responding to a medical call. Jones’ home is located a little more than half a mile from the school.

“We could tell it stopped somewhere close by our house,” she added.

She learned later Wednesday, after a trip to a local doctor’s office, that her former elementary school had caught fire.

Jones remembers attending R.B. Dean in grades one through five and making “some good memories.”

Tiffany Billings, of Steed Circle, also remembers events at the school, like its annual May Day celebration, which included dancing. The 34-year-old said she also remembers the kindness of staff members and the care they gave to students, and especially students who didn’t have much money.

Chavis said the fire could have been worse, and she was grateful the building was vacant at the time of the blaze.

“It’s unfortunate because there is history here for this community,” Chavis said.