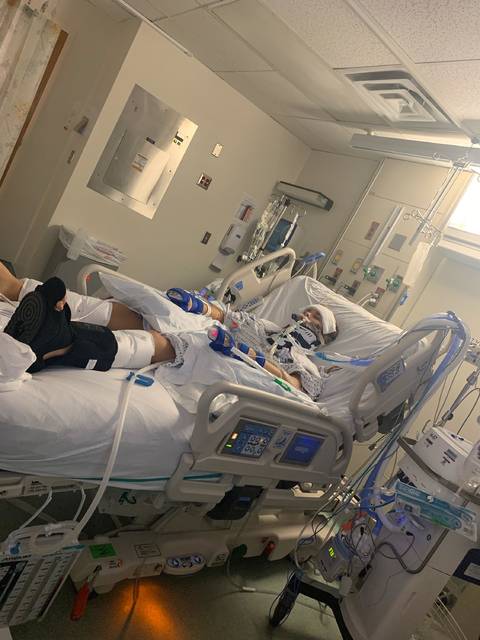 Shown is Brooke Humphrey four months ago in intensive care after a water slide accident that resulted in a spinal cord injury. She returned Tuesday to her home in Saddletree. 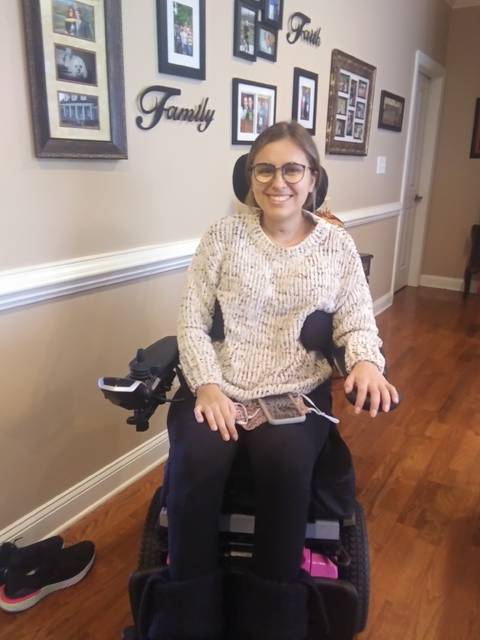 Brooke Humphrey is all smiles after returning home after four months of treatment for a spinal cord injury. The 23-year-old will begin outpatient neurospinal therapy next week at Cape Fear Valley Rehabilitation. 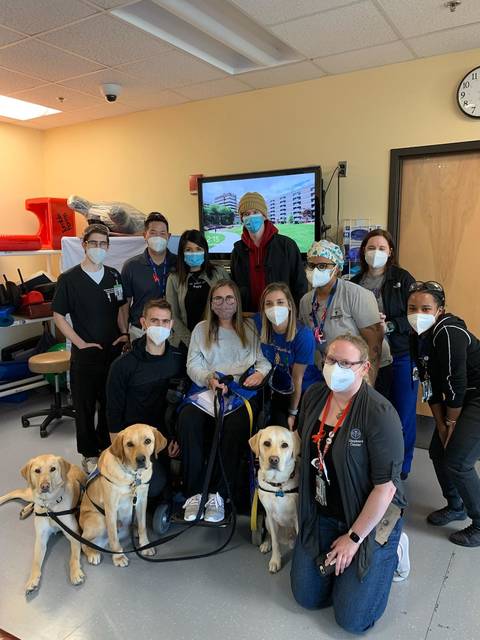 Brooke Humphrey is shown with the group of medical professionals at Shepherd Center in Atlanta during her graduation from the inpatient program. She returned to her Saddletree home Tuesday after a three-month stay at the Center. 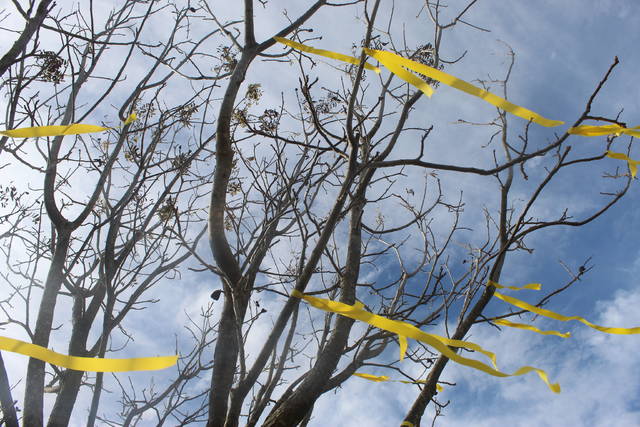 Yellow ribbons are tied to trees along McDuffie Crossing in the Saddletree community. The ribbons were a symbol welcoming home Brooke Humphrey.

SADDLETREE — Douglas Humphrey has a lot to be thankful for this year.

Topping the list is the fact that his 23-year-daughter, Brooke, is alive and home after a three-month stay at Shepherd Center, a rehabilitation facility in Atlanta, where she was receiving treatment for a spinal injury.

“She’s been stuck in Georgia for the past three to four months,” Douglas said. “That little girl right there has touched a lot of hearts with what she’s been through, and we’re grateful for the friends we have and the prayers that went out for her.”

On Tuesday evening, Brooke and her mother, Maria, returned to the family’s home in Saddletree, and were greeted with a police escort; the sight of welcome ribbons lining the length of McDuffie Crossing, the road on which their home sits; and a crowd of about 50 neighbors, co-workers, friends and family.

“I figured yellow ribbons, wonderful; police escort, amazing; but then we get to where we could see all the cars lined up and I think ‘Oh my God,’” Maria said. “I was just — I tried not to cry. It was amazing because it was the community.”

“It was very, very nice,” Brooke said. “Gosh, it was wonderful.”

Brooke was injured Aug. 29 when she was at home of her best friend’s father, who had rented a 10-foot water slide. Brooke said at point she came down the slide with her friend’s stepbrother.

“He’s much bigger than me, and I think we just came down the wrong way and he fell on my neck,” she said. “I had been down several times and I might have hit my butt too hard or I might of hit my elbow to hard, but I knew this time it was my neck.”

Brooke was taken to Cape Fear Valley Medical Center in Fayetteville and from there was airlifted to the Intensive Care Unit at UNC Memorial Hospital, where she stayed for 10 days. After treatment there she was taken to Shepherd Center for rehabilitation, but underwent even more intensive care.

“When she got there, she ran into several problems,” Maria said.

The C2, C3 and C5 vertebrae of Brooke’s spinal cord were damaged, and the C4 was replaced because it had been crushed, Maria said.

In addition to her spinal injuries, Brooke’s tracheostomy tube had to been removed, which resulted in bleeding, which resulted to pneumonia, which led to pneumothorax, which is the presence of air or gas in the cavity between the lungs and the chest wall, causing collapse of the lung. Brooke spent a total of three weeks in the ICU.

“In the beginning it was really hard,” Brooke said.

Once Brooke began physical therapy, things started to move along. She worked on basic exercises, like hand and arm movements, feeding herself and showering.

“They basically helped me with anything that will help me be independent, but I still need lots of help,” Brooke said. “They focus on building up my strength and as much endurance as possible.”

At no time during the process did Brooke get discouraged.

“I had a good therapy team, and they knew what I could handle,” she said.

Currently, Brooke’s body is slow to gain mobility on the left side and she is confined to a wheelchair. She doesn’t have movement in her left leg, wrist and arm. But she can use the hip flexor muscles, which allows her to drag her leg sideways.

“The right side moves but it’s not very strong,” Brooke said. “My right arm is pretty good but it’s really hard to grip on some things like my phone — it’s terribly heavy.”

What the left side does have is full sensory reception, Brooke said.

“The right side has all of the mobility but it doesn’t have any of the pain receptors and can’t feel temperatures that are hot and cold,” she said. “Sometimes I’ll stretch my right leg and feel all of the pain on the left side.”

Nick Lowery, Brooke’s brother and a registered nurse, said it’s unclear when or if the receptors will return to normal.

“Sometimes it can take years because we don’t know how much damage is done to the nerves,” Lowery said. “That nerve connection is not there right now, so we don’t know if it will come back.”

Although Shepherd Center has an outpatient center, Brooke and Maria were anxious to return home, which is what motivated them to return to Saddletree.

“We chose to do outpatient therapy closer to home,” Maria said.

Brooke will undergo outpatient therapy at Cape Fear Valley Rehabilitation Center. On Monday, she will have her first two-hour assessment to establish her neurospinal therapy plan.

One thing Brooke’s experience has revealed is just how much people have been praying on her behalf.

“We don’t ask we just do. We’re just that kind of community,” Douglas Humphrey said of the Saddletree community. “The community did more than anybody. We are very fortunate for where we live.”

Before the accident, Brooke had just graduated from East Carolina University and was planning to marry Shane Donovan this month.

“Everything is being put on hold for now,” Brooke said.

A GoFundMe page titled “Brooke Humphrey Medical Fund” has been established to assist with Brooke’s medical expenses. So far, the page has raised more than $13,000.

LUMBERTON — District Court Judge Brooke Clark has always had an interest in people.

LUMBERTON — Three new judges will be sworn onto the Robeson County District Court bench, including Assistant District Attorney Angelica Chavis McIntyre, who defeated the only running incumbent, Dale Deese, in a landslide victory on […]

LUMBERTON — The person who murdered Ola Bonnette’s oldest son more than six years ago has escaped justice so far. Now she worries the killer of her other son might as well. Ola Bonnette’s youngest […]