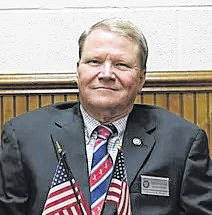 ST. PAULS — Commissioners here were urged Thursday to find ways to buy more Narcan because the town police department’s supply of the life-saving drug is low, a situation that resulted in part after officers responded to eight overdose calls since Friday.

“We’ve gone through so much of it,” St Pauls Police Chief Steve Dollinger said.

The police department bought enough Narcan, a medication used to reverse the affects of opioid overdoses, to administer to officers should they come in contact with fatal concentrations of narcotics.

One package of Narcan, which contains two doses, costs about $75, Mayor Pro-Tem and St. Pauls Fire Chief Evans Jackson said. If the trend established since Friday continued, the town would need $50,000 worth of Narcan to keep up, he said.

The police department will begin seeking grants to cover the cost of Narcan, but asked the commissioners to consider providing money so the department can buy more in the future.

“The cost is astronomical,” the police chief said.

The need calls for a serious discussion on whether or not officers or town residents are given the Narcan, when supplies are limited, Jackson said.

“We’re going to have to make some hard decisions,” Jackson said.

Mayor Elbert Gibson said protecting officers is vital, and they should be given priority regarding the use of the last doses on the shelf, in his opinion.

“I think that’s something we need to give a lot of thought to before we say anything else,” Jackson said.

In other news, the town received an additional $100,000 this week from the Golden LEAF Foundation. The money will be added to the $330,000 the Foundation provided for the North Wilkinson Drive drainage system improvement project.

Commissioners also approved spending about $15,000 in Hurricane Dorian funding the town received this week from the Federal Emergency Management Agency to buy a water pump system to help remove floodwater in the future.

Public Works Director Danny Holloman estimated the pump system will cost between $9,000 and $15,000. Holloman agreed to follow up with Johnson Friday so the purchase can be made.

Commissioners scheduled a budget workshop meeting for 7 p.m. Tuesday and a public hearing on the budget for 7 p.m. June 29.

In other business, the town also placed a property on Chapel Street and a property at 222 Pate St. up for bids at market value.

No action was taken Thursday on the issue of adding an additional insurance policy to cover damage to Town Hall by windblown rain.

“We spent a fortune on this building because of windblown rain,” Jackson said.

Also on Thursday, Steve Glover, a resident of 341 S. Johnson St. and owner of Broad Street Cafe, demanded answers from the town board on the progress of the Elizabeth and Johnson streets drainage project.

“It seems to me like somebody’s not doing their due diligence,” he said.

When Hurricane Matthew left 4 feet of standing water in his home, Glover was forced to spend $80,000 to rebuild his home. And he is not willing to do it again four years later.

“If or when our house floods again, we’re going to let it sit there and rot,” Glover said.

Gibson assured Glover the town was working to move forward on the project, but funding has proved to be an obstacle.

“I know that y’all have been through the devil and back,” Gibson said.

And the project continues to be a focus of the town board, he said.

Commissioner Jerry Quick said he would attend a meeting Tuesday with members of the Department of Transportation, to get answers.

LUMBERTON — The Sierra Club has issued a statement painting a picture of and end for the Atlantic Coast Pipeline, but builders of the natural gas highway and one industry observer reject that notion. Doug […]

LUMBERTON — Robeson County government offices will continue to operate as usual for the time being in the face of the health threat posed by COVID-19, but all non-emergency travel for employees has been canceled. […]

LUMBERTON — Leaders of the Public Schools of Robeson County are wasting no time getting to the Robeson County Board of Commissioners a petition for a bond referendum they want before voters in November. School […]