Serilda Goodin appears in ‘Another Christmas’ now available on Roku

MYRTLE BEACH, S.C. — Lumberton’s Serilda Goodwin is showing off her acting chops in the holiday film “Another Christmas,” now available to stream on Roku and other platforms.

“Another Christmas” was filmed in Myrtle Beach, South Carolina, early March 2021 and follows Kelly Brook, played by Sheena Faust, who is an elementary school teacher who gave up on love during the holiday season until her childhood friend Andrew, a professional baseball player played by Malik Brazile, returns home to win Kelly’s heart for Christmas.

Goodwin is playing the aunt of the character played by the former member of R&B group, City High, Ryan Toby. Toby also played a role in the classic television movie “Sister Act II” with Whoopi Goldberg and Lauryn Hill. He leads the film as the cousin who visits out of town to celebrate the Christmas holiday with his family.

She said because of his experience Toby was somewhat of a mentor onset.

“Everybody remembers him as the kid who sang ‘Oh Happy Day’ in ‘Sister Act’ and he’s all grown up and he helped us so much,” Goodwin said. “He really helped us to make the film more real because he’s had such great experience. He would give us pointers.”

Although this is her first full-length movie, Goodwin has experience acting and performing but working in a full-length film is a new experience.

“It’s just so different from what I have done,” Goodwin said.

What she learned most about working on set is the importance of reading. Goodwin said she would like to encourage those interested in the acting field to establish a strong foundation of reading.

“Another Christmas” was written, produced and directed by Stacie Davis Hamiliton, a Claflin University graduate with a Bachelor of Arts in Communications. She began her career in television news before transitioning into film and opening her production company Davis-Hamilton credits include “Christmas in Carolina” featuring Kellie S. Williams and Darius McCrary from the hit TV show “Family Matters.”

The cast in this film is primarily made up of people of color, which Goodwin said added to the experience.

“I’m honored that I’m one of the people blowing life into someone’s imagination and dreams and it’s very surreal and exciting, and kind of nebulous,” Goodwin said.

It has also been “surreal” to now call herself an actor.

“Wow, this is real. I’m an actor now … All actors and actresses are regular people. We just happen to do a different type of work that most people don’t do,” Goodwin said.

Goodwin will be hosting a virtual watch party at 7 p.m. on Dec. 4. Those interested in attending can do so via her Facebook page. 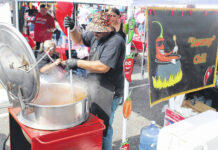 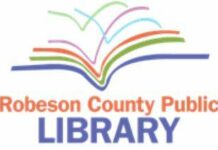 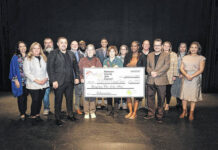