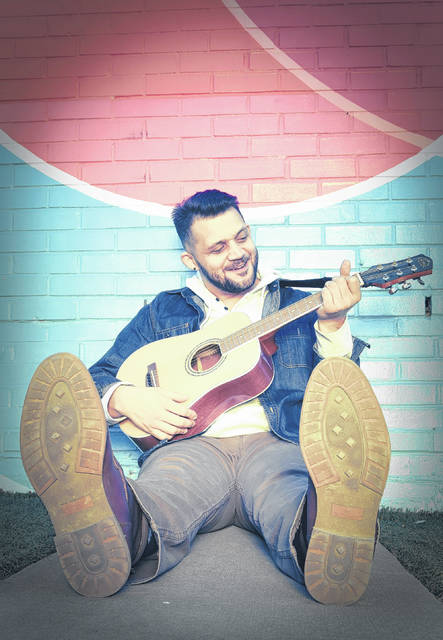 The “emotional” EP features seven tracks, all written and co-written by Roger Dale and produced in Nashville by fellow musician and 2019 Josie Music Awards “Music Producer of the Year” nominee Justine Blazer at Ten7Teen Studios, who also lends vocals on the track “Why Don’t We.”

With a rich, soulful voice reminiscent of traditional country favorites, Dale takes listeners on a journey through love for one’s self and others, showing both the good and the bad, and how those experiences can shape one’s being.

“Phases and Stages as a whole is a wild, but beautiful, roller coaster ride through stories of all that love entails and how it builds us as people,” Dale said. “It means so much to me to finally release my debut EP album with songs I wrote, conveying stories straight from my heart. I hope listeners love the songs as much as I do and find one or a few that they connect to.”

Originally from Pembroke, the 37-year-old’s sound is heavily influenced by his southern roots and his love for authentic country music. Robeson County listeners will more so appreciate the track “Boys Like Me,” featuring Parr Usual, as it reminisces about Dale’s hometown.

“So much of me is in my music because of where I’m from, so you’ll be able to hear that in some of the lyrics,” Dale said. “My heritage and my culture is everything, so it definitely comes through in my music.”

Dale’s background as a civil rights attorney and American Indian brings a unique perspective and sense of unity to his songs that resonate on a broader level.

“I write from a real place,” Dale said. “It’s either I’m going through it or someone I know is going through it or went through it, and that’s kind of how I bring my visions alive through music. A lot of the cases that I’ve worked on and even being a civil rights advocate — the song “One World, One Love” it is about that.”

“One World, One Love” was written Jan. 6, following the riots that occurred at the the U.S. Capitol in Washington, D.C. Dale lived about 15 minutes from the event at the time and personally experienced “the chaos.”

“It was pretty traumatic. Being a civil rights attorney and working for the federal government, to see democracy fall so quickly it was actually surprising,” Dale said. “I was really numb. I was shocked more than anything. I couldn’t believe that the Capitol had been overthrown by citizens. It was truly chaotic.”

That night, sirens got more intense and Dale couldn’t sleep, so he began to journal his thoughts. The result was a song about unity and putting aside differences.

“I didn’t know that it would become a song that I would record, honestly, but I had to get it out because it was just jarring,” he said.

Being an attorney and “watching our democracy fall by the wayside” has shown Dale even more the importance of spreading the word through his music.

“I know that my voice is here for a reason and I’m speaking out against oppression and undeserved communities that have never had a voice. That has always been my mission in life as an attorney and I’m bringing the same thing to music,” Dale said. “My goal is to do this not only for me but for all the others that never had a chance and they continue to be oppressed. That gave me a little more fire when I saw that happen and lived through it.”

He hopes that through his music, people will come together.

“No matter our race or religion, wherever you’re from, we are one and we have to come together and learn to love again. I hope it resonates not only with people in our country but around the world to put aside our differences,” Dale said. “I stand for love. I hope it brings peace and love to everyone who hears it, and that’s the reason I wrote it.”

The EP also includes “Love Don’t Love Me Like It Use To,” “Second Chance” and “White Noise,” plus a bonus track titled “Chasing Blue,” a song written about post traumatic stress disorder awareness.

“I have to have a vision and then last October, the album title came to me. It was ‘Phases and Stages’ and I liked that. All seven of these songs fit into the mold of exactly what it means, ” Dale said.

Dale has been steadily releasing music in anticipation of his debut project all while gaining a loyal fan base, garnering him nearly 15,000 monthly Spotify listeners. For more information visit https://rogerdaleofficial.com/.

PEMBROKE — The Lumbee Tribal Council voted 12-8 to defund a $10 million project to build low-income homes in Prospect. Pembroke police and Robeson County sheriff’s deputies were outside the council chamber that was filled […]

LUMBERTON — About 150 chorus students will receive some much-needed supplies thanks to donations from the Robeson County Arts Council and the Bill and Melinda Gates Foundation.