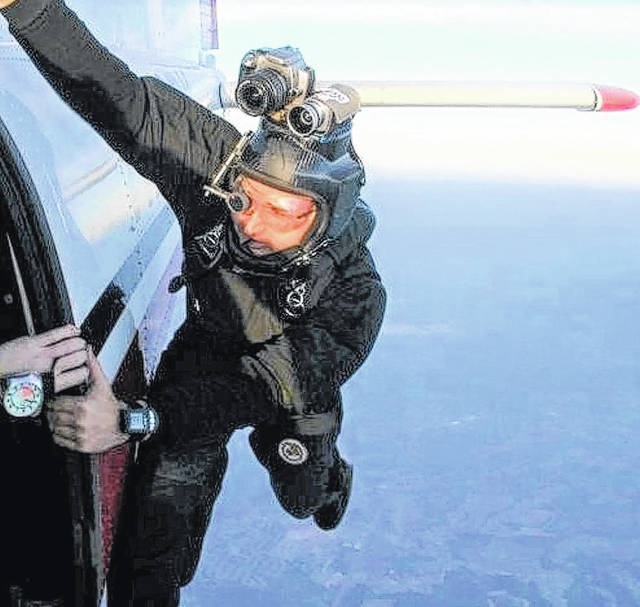 Over the past two decades Steven Singletary has been a skydiver, skydiving instructor and a senior parachute rigger. His knowledge helped him design two parachutes used by the Nobel Peace Prize-winning U.N. World Food Program. 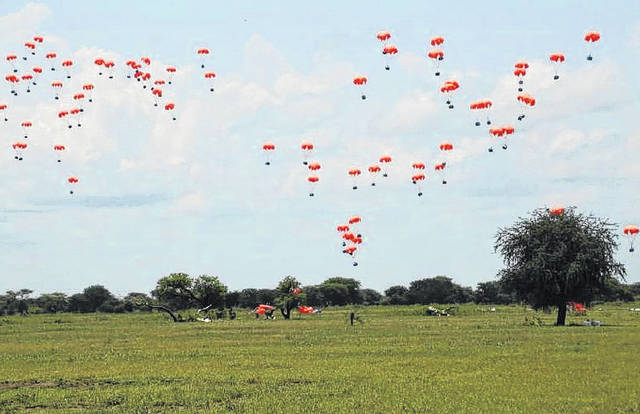 Food falls to the ground in Africa after the U.N. world Food Program made the drops from planes using parachutes designed by Steven Singletary. Singletary is a professor at The University of North Carolina at Pembroke. 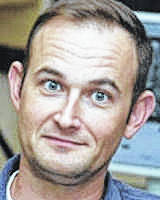 PEMBROKE — Years of jumping out of planes has come in handy for Steven Singletary, a professor at The University of North Carolina at Pembroke.

The Tar Heel native has always had a fascination with aircraft and spacecraft, and after going through pilot flight school in 1988 he discovered his love for skydiving.

During the past 20 years he gained experience as a skydiver, skydiving instructor and a senior parachute rigger. As a rigger, Singletary learned the ins and outs of maintaining and repairing parachutes, and the physics behind them, which gained the attention of the U.N. World Food Program, which was recently awarded the 2020 Nobel Peace Prize primarily for air drops of food made in South Sudan.

The program is geared toward the delivery food assistance in emergencies and working with communities to improve nutrition and build resilience in countries in need. In 2019, it assisted 97 million people in 88 countries.

It was about five years ago, while the WFP was working to design parachutes for food drops in Sudan, that Singletary got involved.

“South Sudan is one of those areas that because of the war and climate change, it’s hard for people to get food,” Singletary said. “There’s a lot of famine. People are starving.”

The U.N. World Food Program began trucking food into the hunger-stricken places, but the process was corrupted when warlords seized control of the foods, Singletary said.

“There was a lot of corruption, so the people who needed the food weren’t getting it,” he said.

The program had to go back to the drawing board after finding it was too expensive to fly food into these areas using helicopters and soon began renting large aircraft and dropping flour, wheat and grains to hungry people.

Singletary said after realizing the people needed oil to cook with, they had to come up with another plan for dropping food.

“You can’t just throw a can of oil out the plane,” Singletary said. “Well you can, but it will explode.”

The WFP began testing parachutes with Rampart Aviation, which once employed Singletary. After much trial and error, Singletary was brought in to assist.

“One day they were testing at the Rampart facility and the vice president said ‘Hey, if you really want to know about parachutes you need to go talk to this guy who worked here.’ and they ended up giving me a call,” Singletary said.

Once Singletary got involved with the process he immediately pointed out the errors in the design. It’s different from the parachute most people jump with because those are steerable, he said.

After three or four months of trying to fix the original design, Singletary completely redesigned the parachute about the spring of 2016, and the parachute became operable by summer.

“It was a success from the get-go,” he said. “They adopted that design, and it was the one the U.N. ended up using for a long time.”

He later redesigned a second parachute, which Singletary believes is being used currently.

“Who knew that my love for throwing stuff out of an airplane, including myself, have meant so many people have eaten? It was really rewarding,” he said.

Singletary credits his knowledge of parachute rigging and what he gained from higher education for having the opportunity to play a significant role in the program.

“I know a lot about how parachutes are constructed,” he said. “Combining all that with the physics and engineering I’ve had from school it seemed like a natural fit.”

After serving in the U.S. Marine Corps, Singletary received a degree in math and computer science from UNCP. He also holds a master’s degree in geology from Texas Christian University and a doctorate in geochemistry from the Massachusetts Institute of Technology. He is currently pursuing a master’s degree in aeronautical engineering at N.C. State through an online program.

Now back at UNCP teaching chemistry, Singletary hopes to encourage his students the way professors encouraged him.

“They believed in me even when I didn’t because when I first came here I didn’t want to be in college,” Singletary said. “They just kept having faith and before I knew it, I was applying to graduate school, got into graduate school and kept going. If it had not been for those instructors pushing me, I doubt I would have gone anywhere.”

He tries to do that for his own students by pushing the 3 plus 2 Program at UNCP.

First established in 2016, the dual-degree program in mechanical or electrical engineering gives students the opportunity to spend three years at UNCP and two years at N.C. State. At the conclusion of the five-year program, participants will earn a bachelor’s degree in applied physics from UNCP and a bachelor’s degree in electrical or mechanical engineering from N.C. State.

Last year leaders from both institutions met at UNCP and signed an agreement to extend the program to include pathways to degrees in civil and environmental engineering in partnership with UNCP’s Department of Geology and Geography.

“The reason that’s so important is because a lot of kids that come here have not been outside of Robeson County,” Singletary said. “That’s a problem. It’s fine to come back and stay here but you still need to go out and see what’s out there.”

The program gives students the opportunity to transition to schools like N.C. State and Duke, and gain knowledge they can bring back to Robeson County, he said.

“It’s hard to attract qualified engineers to this area,” he said. “The 3 plus 2 Program helps us build that local talent to try to attract more industry so that everybody benefits.”

So far one student has moved on to NC State and few more will be going next year.

“The pipeline is starting to work but were still in the part where we’re priming the pump and getting things moving through but we’re starting to see results,” he said.

Singletary hopes to continue the work of the faculty who helped him succeed and ultimate help feed millions.

“We have a lot of talent and if I can give them some of the same opportunities that my advisors and instructors gave me, then that’s a small way of paying them back,” he said.

LUMBERTON — Local assisted living facilities are becoming more creative in their attempts to brighten the spirits of residents during a time of visitation restrictions related to COVID-19. Three days after Gov. Roy Cooper declared […]

PEMBROKE — Filling up the recruiting trail with in-home and in-school visits, The University of North Carolina at Pembroke football coaching staff competed their goal, with the work culminating and showing on National Signing Day. […]

HOUSTON — Kelvin Sampson was watching news coverage of Tropical Storm Harvey on Monday when he saw an image he won’t soon forget. “There was a lady who had her first-grader (son) on one hip […]