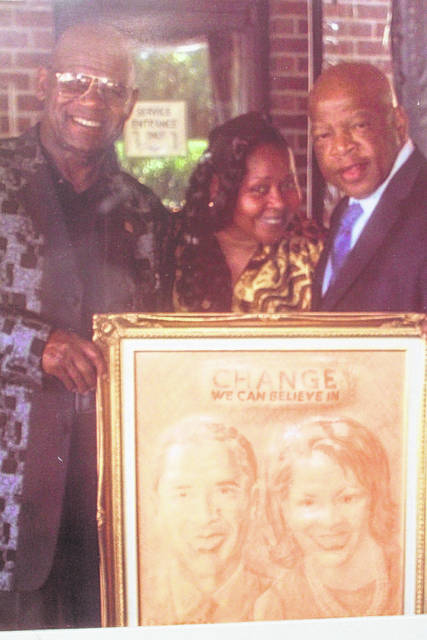 Shown is Terrence Hill and his wife, Nicole, standing with the late U.S. Congressman John Lewis about 15 years ago. Hill, a Red Springs-based leather artist holds one of his works featuring former president and first lady Barack and Michelle Obama. 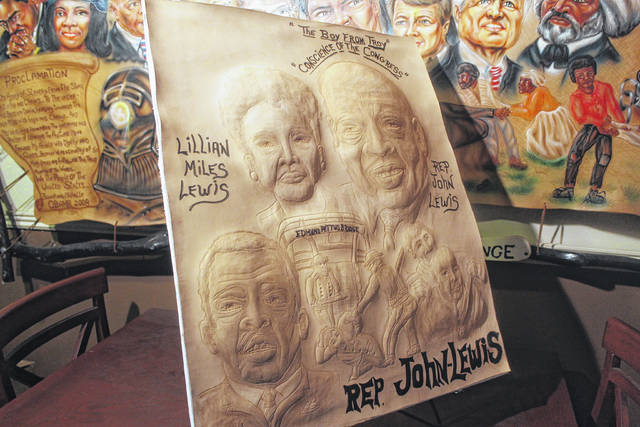 Here is a leather artwork by artist Terrence Hill that features the late U.S. Congressman John Lewis. The piece includes an image of the Edmund Pettus Bridge, and also depicts Lewis being beat by Alabama state troopers on what is known historically as “Bloody Sunday.” 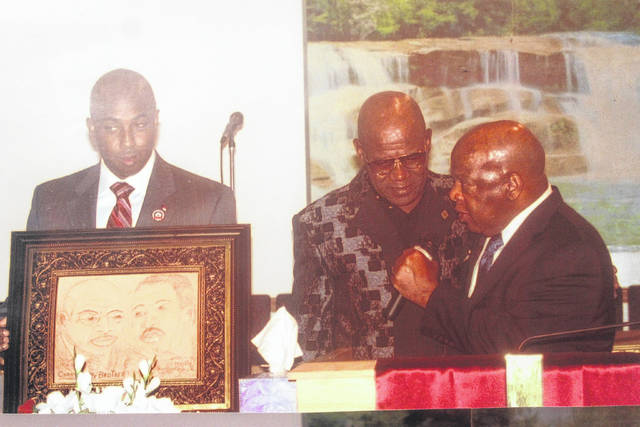 RED SPRINGS — Leather artist Terrence Hill was “angry” when he first watched the video footage of the life being drawn from George Floyd as a police officer rested his knee on his neck.

Hill said anger is also what he felt for 26-year-old Breonna Taylor, a woman who was shot eight times in her home in Kentucky by police during a failed drug bust; and when 25-year old Ahmaud Arbery was shot during a jog in his neighborhood in Georgia.

Like the many ways the 71-year-old deals with his emotions, he took to his craft despite being slowed down because of a recent cancer diagnosis. The end result is a 3-foot by 4-foot Black Lives Matter piece featuring Taylor, Arbery, Floyd and Rayshard Brooks, who was killed by an officer at the parking lot of an Atlanta Wendy’s restaurant.

“I was just about finished with Ahmaud and that’s when they killed Rayshard,” Hill said.

Hill is no stranger to presenting tributes to African Americans who have left an imprint on American society. Hill has presented works personally to golfer Tiger Woods, civil rights activist the Rev. Al Sharpton, and Coretta Scott King, widow of Dr. Martin Luther King Jr. His most recent works include tributes to John McCain, Kobe and Gigi Bryant, and U.S. Congressman Elijah Cummings. Hill plans to present his Cummings piece to the late congressman’s wife, Raya Rockeymoore Cummings, in Virginia.

Hill’s technique consists of carefully sketching out the drawings of the subject on paper, then manipulating the shapes onto a dampened piece of cowhide to bring out the drawing, akin to a three-dimensional image.

Across the top of his more recent Black Lives Matter tribute is the phrase “Take Your Knee Off Our Necks,” a symbolic message for Hill, who said he has dealt with racism and police intimidation throughout his life.

This is also why Hill felt it important to pay tribute to U.S. Rep. John Lewis using his leather talent. Funeral services were held this week for Lewis, who died July 17. Lewis is known as being among the “Big Six” leaders of the Civil Rights Movement. At the age of 23, he was an architect of and a keynote speaker at the historic March on Washington in August 1963.

Hill first met Lewis when he was campaigning years ago for a local mayor. During that time he displayed an image of Barack and Michelle Obama. Later, Hill presented Lewis with an image of the Rev. Dr. Martin Luther King Jr. shaking Lewis’ hand as the other rests on his shoulder. It was titled “Carry On My Brother.”

Hill began working on the latest work as soon as Lewis died, he said.

“He’s just the nicest guy you’ll ever meet,” Hill said. “For me, he was like an uncle.”

Hill’s latest work of Lewis depicts a current portrait with his late wife, Lillian, as well as Lewis in his younger years. Towards the center of the 3-foot by 2-foot work is an image of the Edmund Pettus Bridge in Selma, Alabama, and an image of Lewis being beat by Alabama state troopers on what is known historically as “Bloody Sunday.” Toward the bottom is an image of President Barack Obama presenting Lewis the Medal of Freedom.

The top of the work bears the statements “The Boy from Troy” and “Conscience of the Congress.”

“When I heard Nancy Pelosi call him ‘The conscience of the congress’ I had to put that in there,” Hill said.

The Lewis piece, and the Black Lives Matter piece, will soon be complete, Hill said. The cancer has slowed him down but has not yet stopped him from remembering and honoring those who have contributed to the United States.

“All I can say is thank the Lord for what I’ve been going through,” he said.

Once complete, Hill plans to give one of his works to the African American History Museum in Washington, D.C. He is also looking for living relatives of Lewis in the hope of possibly sending the piece to one of them.

Hill’s other works can be viewed or ordered online at www.art3dleather.com.

Camp near Fairmont is where “Heroes” can get help find purpose

FAIRMONT — When Captain John “Woody” Woodall, a former Raleigh man, first stepped out onto a secluded stretch of land in Fairmont nearly three years ago, he knew he found what he was looking for. […]

Vacant building in downtown Lumberton gets a mural

LUMBERTON — With 30 minutes to go before the doors opened at the Belk store in Biggs Park Mall for its annual gift card giveaway, Starlett Rolland sang gospel songs to entertain the crowd and […]