LUMBERTON — W. Curt Vincent has made a career out of writing in the newspaper industry, but he had never considered publishing a book — now his second has just come out.

The Lumberton resident’s “The Duck That Couldn’t Quack” was recently released featuring illustrations from Scotland High student Amber Jones. He wrote the book a little at a time, forgetting about it for even a year, and then early this year decided to publish it.

“For me, it’s impossible to just sit down and think of an idea for a children’s book,” said Vincent, editor of The Laurinburg Exchange. “I need the inspiration of a child to make it possible and to spark the idea.”

His inspiration for both books came from his granddaughter Kaylee. The first book, “The Luckiest Leaf,” was a six-month project that happened after Vincent and Kaylee were raking leaves in the fall, and it wasn’t even Vincent’s idea to publish it.

“I didn’t decide this, she did,” Vincent said. “When I wrote the first one I put it in a desk drawer. I had no intention of it being a book, but she kept pestering me. She wanted to see an actual book, so in 2013 I said. ‘OK, let’s do that.’”

For the second book, it was important for Vincent to bring some local aspects into the book, including having the Lumbee River, Chalk Banks and having illustrations done locally. But he also wanted to it have a different feeling.

“I wanted something that was a little older feeling, but still had the positive message in it,” Vincent said. “The inspiration came a little differently … we had started to write a fun and crazy story between ourselves. She would write a paragraph and then I would write a paragraph about barnyard animals, and at one point she said, ‘what about a duck that can’t quack?’ and that was the spark.”

In this story, parents Doc and Dixie could only support their son, Dooley, as he met the challenges caused by the fact he could not quack. And in the end, his persistence and will to be successful proved to be the difference.

Vincent adds he was extremely happy with how the second book came out and said that publishing the first one was exciting, but this time around he knew what he was doing and what to do better.

“I went into this fully understanding I wasn’t in it for the money possibilities or any recognition of any kind,” Vincent said. “I was in it to hopefully pass along a positive message to kids who desperately need it. That was my overriding thought process.”

The book will be making its way to the Scotland County Memorial Library in the near future, and Vincent has been signed up to speak virtually with community members for the library’s virtual book-chat program.

While the book can be purchased online at xlibris.com and amazon.com, Vincent recommends buying through him — not just for lower prices, but also so he can personalize the book. The book costs $11 for a softcover or $16 for a hardcover. 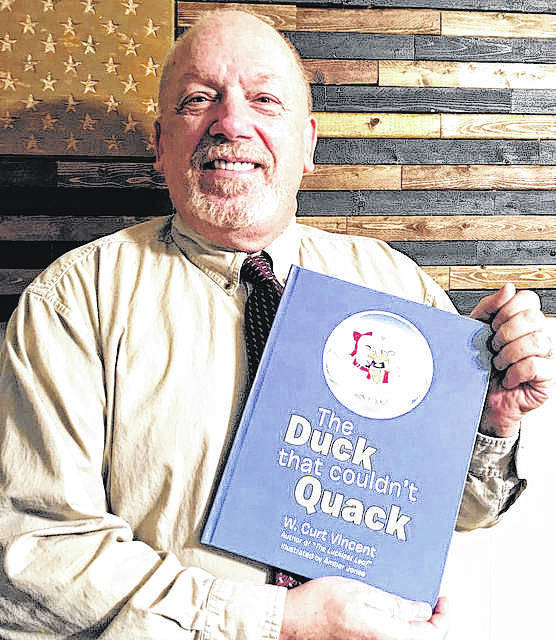